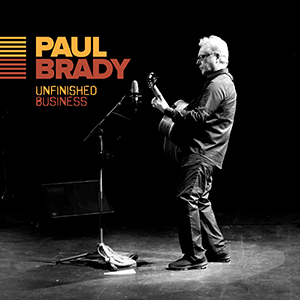 The Irish master in eclectic mood

If Bob Dylan, no less, reckons you are a “secret hero” then to be fair, you can probably take seven years between albums. Here was a man, after all, who didn’t bother to acknowledge the people who gave him the Nobel Prize For Literature until he was ready. If he likes you, blimey…

“Secret hero” was what the great man called Paul Brady, for whom “Unfinished Business” is a first album in a very long time.

It is also a record that finds him in eclectic mood. Each of the 11 tracks – nine original and two trad – cover a different base, as if Brady spent his time away soaking up as many influences as he could and “Unfinished Business” is the result.

The opener and title track casts him in some jazz club at the end of the night propping up the bar lamenting “the one who really was the one”, but it is followed with something that, although from the same theme, is altogether more playful. “I Love You And You Love Him” finds him up against “the loser who’s your new hang” and along the way becomes what MV is willing to bet is the only song to suggest “I love whole milk, for you its semi-skimmed”.

There is a point to the knockabout stuff though, and this is a very Irish way with words. “Something To Change” has echoes of Van Morrison, but its use of a horn section is perfect, while “Say You Don’t Mean” is dark blues, which if it were on a modern Joe Bonamassa album wouldn’t be out of place.

Some albums with this many disparate ideas and threads might struggle from a lack of coherence. Not here. That is rather because whatever Brady does he does with a class and his wonderful weather-worn vocals bind the whole thing together. Even the dreamy “Oceans Of Time” which has all the urgency of a man with a hammock and tomorrow off work belongs here and the flute solo is superb.

“Harvest Time” is laid back acoustics, and “I Like How You Think” has the air of a Springsteen track circa “Tunnel Of Love” which benefits enormously from the lap steel work – and the fact it rhymes “sponge” with “plunge” without a care in the world.

“Maybe Tomorrow” is perhaps the most Celtic cut here, sounding like something off Mark Knopfler’s recent solo work and “Once In A Lifetime” is absolutely gorgeous, bringing us almost full circle from the heartbreaking opening song.

The two traditional folk songs show yet another side to Brady’s work. “The Cocks Are Crowing” is a song he has sung for decades and does it justice now on record, but “Lord Thomas And Fair Ellender” is the pick – and indeed isn’t far off being the best thing on the record, as it winds it’s way wherever it needs to go.

Paul Brady’s albums have always been varied journey’s. Even by those standards the sheer breadth of “Unfinished Business” is astonishing. Proof that good things come to those who wait. Dylan’s boy done good.