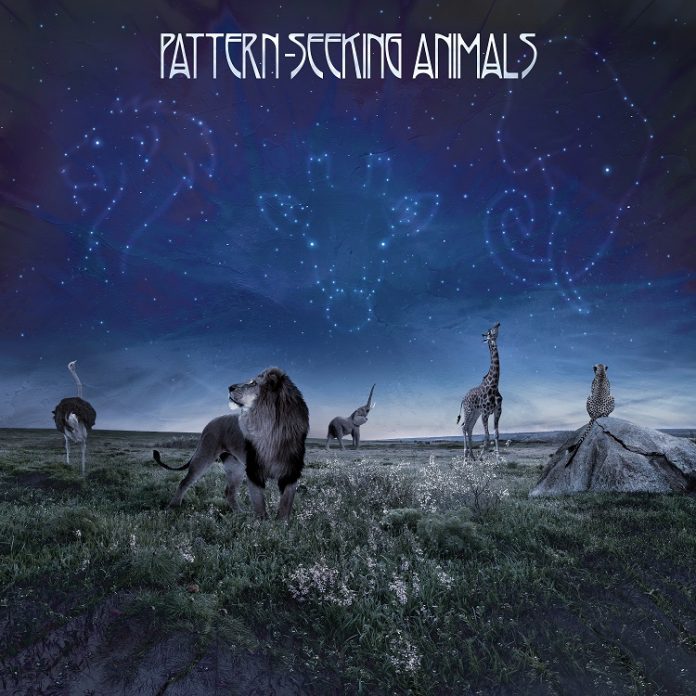 “My goal was to produce music that’s progressive and intricate,” says the Keyboard player and Producer of Pattern Seeking Animals, “While keeping things immediate and melodic.  Whether a song is four minutes or ten minutes long, I didn’t want more than a few bars go by without some kind of instrumental or vocal hook.”

Over the course of this really superb hour, it is staggering how many multi-layered harmonies, how much compelling instrumentation there is.

And that is before we get to who the “keyboard player” as I put it above was.

John Boegehold has been termed as “Spock’s Beard’s” secret weapon. He might be – he has been co-songwriter and producer to the band for goodness knows how long – but he’s front and centre in Pattern-Seeking Animals.

The three others in PSA with Boegehold are Ted Leonard (who has been the bands singer since Neal Morse left) as well as Dave Meros – who like here performs bass duties – and former Beardo, drummer Jimmy Keegan. Now, to be fair, I had been planning to write this without mentioning Spock’s Beard at all, it seemed like a cliché to me to go on about their day job.

Then I ran into a problem. Because however good this is – and it’s absolutely magnificent – and however different to SB it sounds (and again, it really does) the second Leonard opens his mouth, you hear that wonderful voice and go: “yep, that’s Ted from Spock’s Beard.”

Speaking of Leonard, though, does raise something interesting. He is the main guitarist here. I’ve seen him play a bit when I’ve been at Spock’s shows, but here he is sensational.

To make good on Boegehold’s claim, only three of these can be termed as “epics” in the prog tradition. It opens with one. “No Burden Left To Carry” is a sweeping thing, too. Beatles-like harmonies abound (and not for the last time).

But – and this isn’t meant as a criticism on either side of the coin – it is a lot more accessible and pop like than most prog rock. Where sometimes you can feel bewildered, even drained by investing fully in a prog record (I am thinking of the recent, fabulous, Jordan Rudess album and the like here) this one is light, airy and – as the man said – filled with hooks.

“Same Mistakes Again”, which in common with the rest has some poetic lyrical turns, is actually built around lovely pianos and a solo that Leonard should be proud of, “Orphans Of The Universe” is built in widescreen (Boegehold is a film composer and it shows) but musically it mirrors, informs even, the thought we all might be totally clueless.

“No One Ever Died And Made Me King” is – even for this – interesting. A garage rock riff, is then drowned by synths, and there’s a pulse to the bass together with a huge chorus. All inside the first 60 seconds.

“Fall Away” on the face of it is a gorgeous ballad, but then: “I can’t write a song with a happy ending” sings Leonard, and the thing gets wonderfully bleak. Musically too, it is just perfect.

“These Are My Things” is particularly hard to fathom. I guess music means whatever the individual wants it too, so I took it to be an attack on the narcissism of consumerism. Probably way wide of the mark, but either way, the track is great.

“We Write The Ghost Stories” actually comes on like one of those “gypsy jazz” things, and sounds like a plot for a film noir, while there’s just something unfathomably large behind “No Lands Man”, all wrapped around a genuinely catchy hook.

“Stars Along The Way” ensures “Pattern Seeking Animals” is bookended by lengthy cuts. This one, though sounds like its looking out over a cliff, towards the infinite horizon and trying to find its place in amongst it all.

Or, at least it does this time. I’ve listened to this album a few times and felt differently each time, and I suspect that I could listen to it ten more and come up with ten new thoughts. There comes a time, however, where you have to just stop and admit that it doesn’t really matter how it moves you as long as it does. One thing has remained constant, though. “Pattern Seeking Animals” is just a brilliantly conceived, and superbly played album.