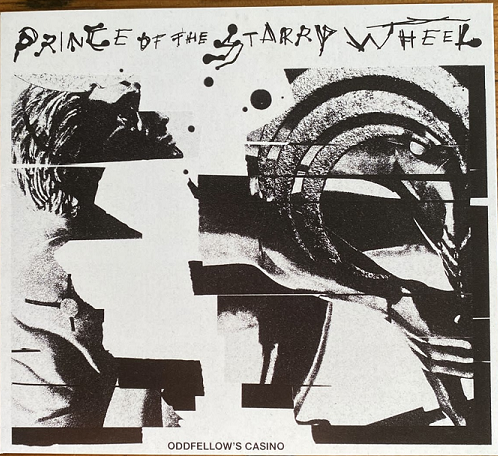 Over the last twenty years Oddfellow’s Casino have released nine albums. Their music blends pastoral psych-folktronica with plaintive orchestrations and drone. At the helm is singer-songwriter, author and druid, David Bramwell, a Sony Award-winning radio presenter for BBC Radio 3 and 4.

Bramwell is the author of several best-selling books including The Haunted Moustache which tells the true story of how he inherited a moustache from a Victorian freakshow host, Ambrose Oddfellow, onetime ringmaster of his ‘Oddfellow’s Casino’. The book may possibly be the longest ever explanation for how a band got its name. There is a new album `Prince Of The Starry Wheel` which takes its title from one of William Blake’s many names for Isaac Newton and is a nod to and record’s themes of our relationship with the physical world, particularly the ground below us. The album is dedicated to Dave Mounfield, close friend of the band and best-known for his roles as Geoffrey and landlord Jack in BBC Radio 4’s Count Arthur Strong’s Radio Show.

The album opens with `Trespass` with a shuffling constant drumbeat at its heart and some shared synth keys and vocals that sway between almost spoken word and sung on this initially dreamy soundscape. The track was inspired by Nick Hayes`s The Book Of Trespass` and is a passionate call to arms for new land rights, paying tribute to the mass trespass of Kinder Scout in 1932 and the Greenham Common protests. This song also features the voices of author Nick Hayes and performance artist Lone Taxidermist. It gains a little more depth around the half way point but retains that sense of languor throughout. I read that `Ameland` is a psycho geographical journey from the Suffolk coast to a remote Dutch island. It`s another contemplative quite wistful offering. This island is known as the `Wadden Diamond` home to flora and fauna and an ideal beachside location to watch seals. The number had that feel of an enigmatic black and white foreign language movie and I found it delightfully compelling.

`Last Orders At The Shoulder Of Mutton` is an oddly enchanting trippy submission which has a quite hypnotic musical soundscape with a nigh on verbal train of thought or shared stream of consciousness throughout. The twelve minute opus `Beware My Love The Autumn People` begins with birdsong before gentle guitar chords, tapped cymbals and quietly shared vocals take us along this journey. The number lyrically, jumps from the horror-writings of Ray Bradbury to themes of loss and the landscapes of Sussex. It almost concludes at times on its voyage but just bursts into life and almost gains strength as it evolves into an almost new dimension. It`s a wonderfully captivating listen and never feels overly long.

`Summer Weaving`. It has a quite heart breaking texture and although it`s a modern reworking it retains that all-encompassing depth and meaning of the original. A song I have to admit I was unfamiliar with but am grateful for being introduced to.  We have pretty much a curve ball with `Emily` a kind of post punk composition with shimmering guitar riffs and vocals almost surfed atop. It sits somewhere between The Smashing Pumpkins and The Pixies.

`The Quiet Man And His Dutch Wife` closes out this release. It`s apparently a drastic re-working of a track from 2002’s `Yellow-Bellied Wonderland` and I’ll leave it to you to decide which one. I had a listen but had to admit defeat. Nevertheless, at just under ten minutes it kind of ebbs and flows and will take you on a fairly enthralling voyage of discovery. It does tend to build as it progresses and while not quite climaxing in a cacophony of sound it does sign out with the interesting and thought provoking  “we all wake up at the end of the world.’

`Prince Of The Starry Wheel` was another wonderfully enjoyable release and to me was a fusion or synthesisof gently shared folk, dream pop and electronica with lyrics that make you almost work for them to gain a little insight. Once again I’d encourage you to get along and enjoy Oddfellow`s Casino where it`s never a gamble but always a sure fire win!!