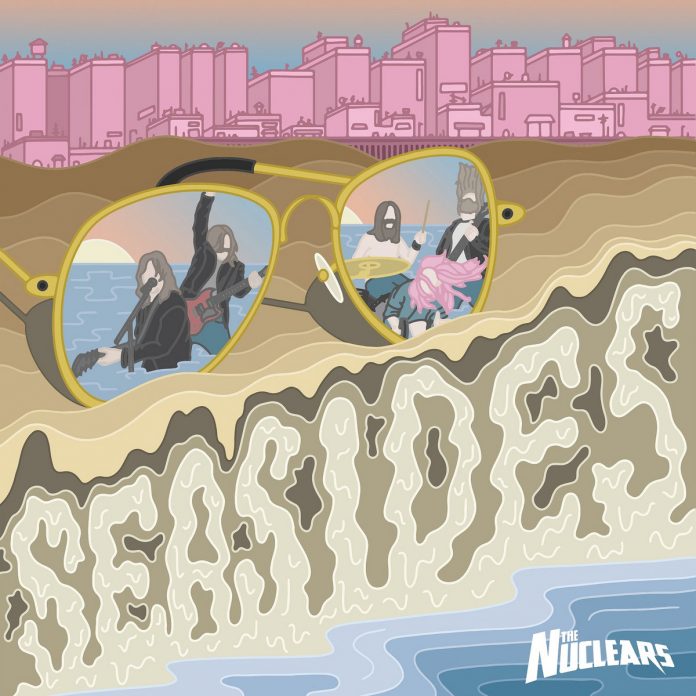 Our friends at Rum Bar Records – Lou might actually be the hardest working bloke in rock n roll, and is definitely the nicest – released this association with Spiderbite Records (my fave name for a label, that). Now, one of the best things about RBR releases is that they don’t mess about with massive press releases, telling you how “Stoked” (and just to reiterate again that when I take over the world that word is going the same way as Facebook). Nope, they let the music do the talking.

The only words they sent with “Seasides” were these: “The Nuclears are a twin-guitar party rock ‘n’ roll band based out of Brooklyn, New York. The Nuclears’ showcase a sonic range: from high-energy protopunk, to 70’s glitter rock, to Kinks-ian power pop, to riff-driven heavy metal.” All true, no problem.

But they caused me to do two things as well. Not least of which are two confessions: Towards the end of the album there’s the wonderful “Slash Run” (the one really that makes good on that metal promise) and it segues into “Strutter”. Now, I know its weird given my love for the music I love, but here’s confession one: I don’t like Kiss, much.

Now I’ve lost half the readership for this review (including the band themselves) here’s confession two. I never cared for “adult material”. Not my thing (genuinely, not just saying it).  But there was the odd teenage excursion to a newsagent where I bought my weekly football magazine, Kerrang and the odd Razzle Readers Wives. You could argue that area is another thing ruined by the internet, and I am guessing Nuclears agree with you, given the rage of “Flat And Nasty”.

That, possibly tips you off that the subject matter of “Seasides” is pleasingly different. It begins – as if to prove it – with a thunderous Hanoi Rocks type romp “Siamese Connection”, but this isn’t what you think, rather it deals with the CIA importing Heroin, complete with the pay -off line “its not a crime if you’re on the right side”.

It’s not a political album, though. Just a very, very good one. “Steer You Wrong” changes tack, Briana Layon (one of three singers in the band) takes the lead for a sun-kissed mellow romp, with the air of a blissed out Stones. “Make The First Move” wants to get laid, and has garage punk as the soundtrack, “Small Talk” takes Skynyrd’s “Gimme Three Steps” as its starting point, then adds layers of sugar sweet harmony to the mix, and good luck to them – the last line is worth buying the album for alone.

For all the knockabout fun on offer, then you do have to credit the Dudolevitch’s (Mike and Brian are up front) with the skill to do whatever they damn well please. “Mystery Slinger” is not only a fabulous blues track, but the solo is a real knockout.

“Bow To The Queen” is cheerily in debt to the likes of Deep Purple or Priest in a way that these type of bands are not often, but as if to balance that out, when “I Just Wanna Have Nothing To Do” has a 60s vibe, a purity of sound if you like, and “Doing The Same Thing Too” allows the rhythm section of Bobby Sharples and Kevin Blatchford to take the limelight, as it discusses the futility of living to work.

The flipside to that is you can work to live, and that, to me is the sound of The Nuclears. The sound of a band that has that New York effortless cool, but one which just wants to have fun. Better than any trip to the “Seasides” that I’ve ever been on. It won’t rain and the sand won’t get everywhere.