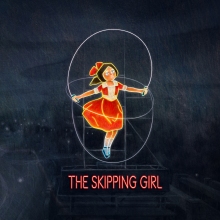 Nicholas John Cester is an Australian musician, singer, songwriter, and guitarist, known for being the frontman in rock band Jet and also a founder of the Australian supergroup The Wrights.

This month sees the release of his debut children’s book and companion album ‘The Skipping Girl’. A variety of factors influenced Nic’s desire to write a children’s book including finding imaginative ways to keep his daughter Matilda entertained at their home in Milan, Italy during the pandemic. His own storytelling was inspired by the tales his own father would conjure back when Nic was a child, using sights from their home city of Melbourne as the launchpad for his fervent imagination. The famous Skipping Girl sign that sits above Victoria Street, Melbourne triggered Nic’s creative process. He shares “On the surface it’s very beautiful and colourful and lights up the skyline, but there’s also a deep sadness to it. For me, it’s always been very melancholic because it’s a child who is trapped in this eternal loop that’s not going anywhere. And for me that was a really powerful metaphor for someone who is trapped in a repetitive loop of any kind: it could be alcoholism, an unhappy relationship, or a job that you’re dissatisfied with.”

The album begins with `Goodnight Beautiful’ which almost has a music box type piano sound before the vocals join in on this quite waltz like introduction which has some charmingly orchestrated strings that give the track such depth. A delightful, dreamy opening. A strummed guitar leads us into `Forever’ a quite captivating listen which bursts into life with another string arrangement and some appealing harmonies.

‘Emily’ is a more upbeat dreamy offering that seems to relate to how the narrator hopes to advise and guide the subject Emily away from making the same mistakes that they have made in their life. We have another cautionary tale with the ballad like ‘Cry Baby’ where the anxiety in the vocals is almost tangible.

‘Don’t Lean On Me’ is an interesting listen, another track that has a waltz like texture at times with some cello swathes that give it a quite mellow come melancholic vibe. There`s a fairly distant nigh on remote edgy feel to ‘Ordinary Love’, which expands as a string arrangement is added as the number evolves.

‘The Way That We Are’ has a tinkling piano that grows in volume as the song progresses and the vocals are shared atop. A somewhat mesmerising listen. This release closes out with `All In Your Head’ which at times sounds as if it has an out of tune piano accompaniment along with a dreamy string complement. This gives it that apprehensive quite uneasy feel that possibly endorses the lyrical content.

‘The Skipping Girl’ is an interesting listen regardless of whether you come to it as a stand alone release or listen to it whilst reading the book.  Nic has a warm and varied vocal range and although the album in under thirty minutes in length, it`s worth taking the time to tune in to.