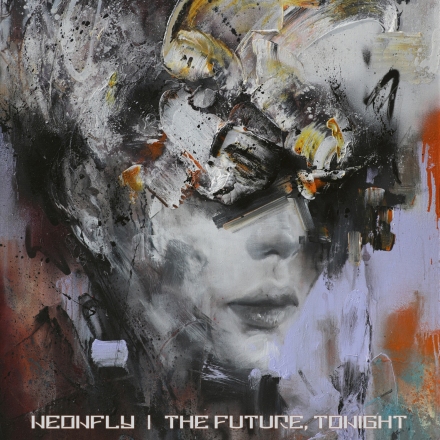 “….whilst the whole band plays with consummate skill it really is frontman Willy Norton who takes the eye, by turns a hip shaking classic rock singer and whirling dervish who is delivering songs from the Merch stand, he clearly believes his band is destined for bigger things.”

Whatever you think of the merits of that sentence (it’s too long, that’s for sure) it was written on 23rd November 2011, about Neonfly. It was the second time I’d seen them. The first was when they opened for a band that had a much bigger ego than they did crowd and talent (hello, Pagan’s Mind!) but man, they were good.

They got better too. And it looked like they were destined for their breakthrough when they supported Dragonforce – then, whether it was me or them, they seemed to disappear.

Anyway, forget that, because they are back now, and given the material on “The Future, Tonight”, they’ve used their seven year hiatus to become a different band.

That was hinted at on “The World Is Burning” – the single they put out a couple of years back – which was heavier in musical outlook, but appreciably tougher in its words. “the world is undone by a knave and his whore” (I like to think it is about the tubby bag of shit that people voted for as our Prime Minister when they lost their minds and the racist that was in The White House) was a different mindset.

In truth it suited them, they were never quite the baby Magnum that many seemed to think they were. Neonfly were many different things. Now it just happens that they are a modern metal band, and by the way, they are still superb.

Put it this way, as Frederick Thunder kicks out the riff to “Last Of Our Kind” the only thing you can think is that if this was an American band, they’d be on the cover of every magazine going – this is what they should be doing, too, rather than cover of “Venus” with the quasi-porn video that came out last year (I only watched a bit before turning it off, I know I am a prude!).

They’ve always been skilled. A cut above the other bands at the same level. They had bigger dreams too, as “Flesh And Blood” underlines. The chorus is for stadiums.

Over the years they’ve opened for many big acts and they’ve evidently got some famous names in their phone book. The modern metal masterclass that is the title track has Bjorn Strid involved doing his Soilwork thing rather than his Night Flight Orchestra one. It is impossible to resist his “I am in hell, but I won’t apologise” hook too.

“Intent” is a word you keep coming back to, throughout, as this seems to be so full of it. “Beating Hearts” builds with a class, and whether or not the opening of “More Than A Lifetime” seems to want to single-handedly resurrect the power ballad, it builds into something special and Thunder showcases his incredible talent once more.

If you want an insight into the brave new (ish) world, then “Another Eden” and “Steal The World” are where you should start, really. On both Kaan Tasan of Heart Of A Coward appears – and I can’t lie here, those type of vocals (like the Strid ones) aren’t ever going to be my preference, you admire the changes. Especially the former, where its noticeable that the solo is sleazy and the keyboards are very Dream Theater, is a statement.

“Final Warning” broods rather ominously and the drums of Dec Brown are proper thrash, and the last one “The Things We Left Behind (And The Things That Slipped Away)” might be a ballad, but it’s a ballad on their terms. No lost love here, rather “there’s no one to watch over us”.

It’s clear. This is our world. This is our chance. And that’s maybe what “The Future, Tonight” is. A re-awakening and whilst some of it might be too heavy for my personal taste, this is the album Neonfly wanted it to be, no doubt.

Their future is, now.