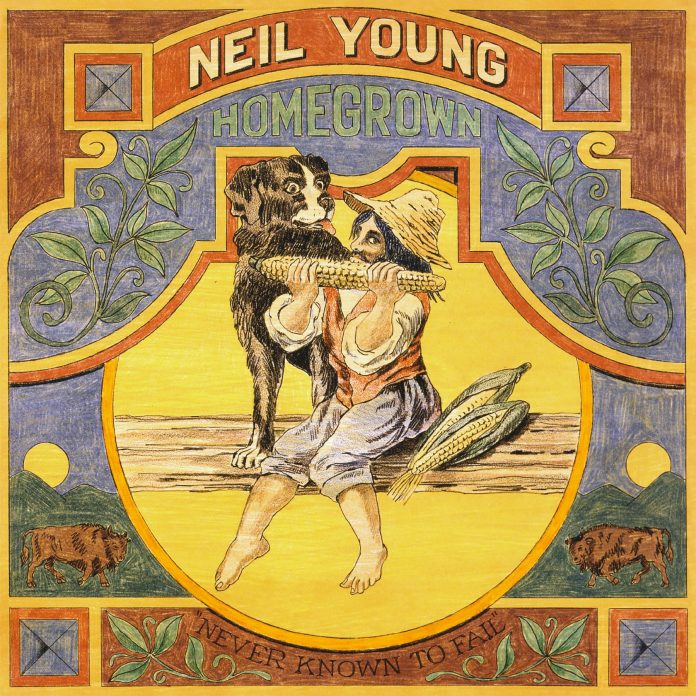 I was 10 in 1985, meaning that I “grew up” as it were in the late 80s/early 90s period. A band releasing an album back then felt like an event to us. I can remember GnR putting the “Appetite For Destruction” records out, or Springsteen with “Lucky Town” and “Human Touch”, say and queuing up outside the record shop to get them when they opening.

The world, of course, has changed since then, but looking back to the year I was born, the sheer amount of great music staggers. Dylan released “Blood On The Tracks” that year, the aforementioned Springsteen “Born To Run”, but its more the spectacular speed with which these things appeared.

I heard David Coverdale being interviewed the other week and he said his contract back in the early days of Whitesnake was for two albums a year. I am sure he wasn’t the only one.

I was considering this when I listened to “Homegrown”. It was recorded after Neil Young had done “On The Beach”. In December 1974 and January 1975, and not put out. The story is that Young thought it too personal, given that it concerned the breakup of his relationship. He put out “Tonight’s The Night” instead.

In that context, then, it seems as if we sneak up on Young as he records this, no discernible beginning to “Separate Ways”, a kind of laid back, country tinged rocker. Almost like you are hearing a sketch of what was in his head at the time. The line that addresses his son “sharing our little boy, who grew from joy back then” is particularly harrowing, for no other reason that it is just delivered as a matter of fact.

“Try” is so sun-dappled and the lap steel so gorgeous that you almost don’t hear the idea “I m trying to count my friends”, and anyway, its piano moves it into another area and you are left wondering where it came from.

There is something about this that suggests that these were sketches, that if he recorded them again Young would do them in a totally different way. The melancholy “Mexico” for example, isn’t even two minutes, and it just appears to be a germ of what might have been an idea.

Five of “Homegrown’s” tracks have appeared in some form on subsequent releases. The harmonica driven “Love Is A Rose” is one and it is a highlight still, while the title track is another of the gem’s, emerging seemingly spontaneously out of a jam that we merely happen across in the studio. At least that’s the feel.

“Florida”, the odd spoken word piece, sticks out like a sore thumb here. Not least because it forms the story for “….Night” and is the poem that appears on its liner notes. It’s experimental tones are balanced out by “Kansas”, the acoustic thing which seems to explain it thus: “we can go gliding through the air, far from the tears we’ve cried.”

Of all the ones you wish that had been left on the cutting room floor, “We Don’t Smoke It” is chief amongst them, a pleasant enough jam it offers little beyond that, but “White Line” is more central to the plot than the version that emerged 15 years after.

“Vacancy” is better, and more “authentic” sounding Young if you like, as he holds back on the guitar, but “Little Wing” (another that had been released since) is arguably the best of all, given how wistful and desolate it all sounds, and “Star Of Bethlehem” – which came out in 1977 is a gem because, mostly of the harmony vocals of Emmylou Harris here.

So “Homegrown” then: One for the completists or deserving of its moment in the sun some 44 years later? A bit of both in honest truth. It is not a bad record at all, but it is not one of the great “lost” records either.