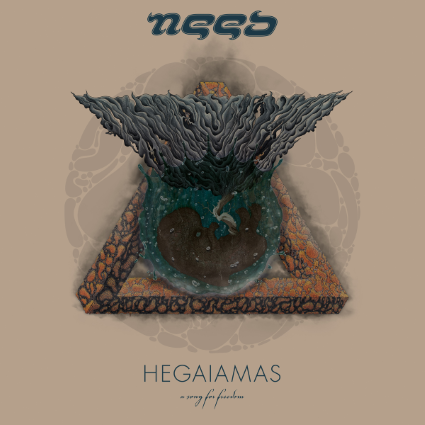 An early bid for Prog Metal album of the year

You know you are deep in Prog territory when the title of the record is a word that even Google won’t recognise, but then Greece’s Need have been busily confounding expectations since 2004.

Good enough to support bands as stellar as Iron Maiden (which means that frankly whatever we say about “Hegaiamas – A Song For Freedom” right now, then Need have won) it is the fact they have shared stages with Symphony X that is particularly pertinent here, because anyone that enjoyed SX’s unbelievable “Iconoclast” record will find much to enjoy here.

Since the band started – releasing their debut album over a decade ago – there has been a definite shift in what the term “prog metal” stands for. Where once it meant Dream Theater and Spock’s Beard it now (and yeah, we get that this makes MV seem like a miserable old git) seems to increasingly represent kids in Skinny Jeans growling through verses and doing melodic things in the chorus.

Happily, Need subscribe to the idea that Prog Metal should be basically be challenging heavy metal, with more than a hint of the grandiose about it and that is exactly what “Hegaiamas: a song for freedom” provides. And by the way it does so in a quite stunning way.

Opening with some haunting female vocals “Rememory” is soon into its work with a wall of riffing from Ravaya (like Cher, these boys don’t need a last name) and by turns it chugs, thumps and drives itself into places you just wouldn’t expect – and you imagine Jon V knows he sounds a little like Russell Allen.

You shouldn’t pigeonhole Need, though. And anyway, if you did you’d be wrong. “Alltribe” for example ushers itself in off the back of some lilting piano and its intricate guitar patterns make it very special indeed.

It’s follow up “Therianthrope” (apparently the mythological ability of human beings to metamorphose into other animals by means of shapeshifting) is the heaviest thing here by quite some way and makes use of narration, while “Riverthane” is probably the most immediate and visceral song here.

“Tilikum” on the other hand is quite a trip inside eight minutes, like some soundtrack to a film that is playing in your head, it is hugely ambition is matched by its sheer gloriousness. But for ambition, nothing here – or indeed anywhere else this year most probably – will match “Iota”. Essentially a five minute play, its spoken word piece is something you will love even if you don’t quite understand what it is talking about.

Everything, though, plays second fiddle to the title track. All 22 minutes of it, which finishes off this stunning journey in stunning fashion. Like everything else here it questions what we are, who we are, what our dreams mean and so much more besides.

Moreover it all sounds sonically marvellous, and when you couple that with its incredibly conceived pieces, then this really is stunning on every level.

It’s the first week of January, and this is the third review we’ve had on here so far in 2017, but nonetheless the gauntlet is thrown down. Prog metal bands, if you can better this then send it to us, we dare ya.

This has everything it Need’s.