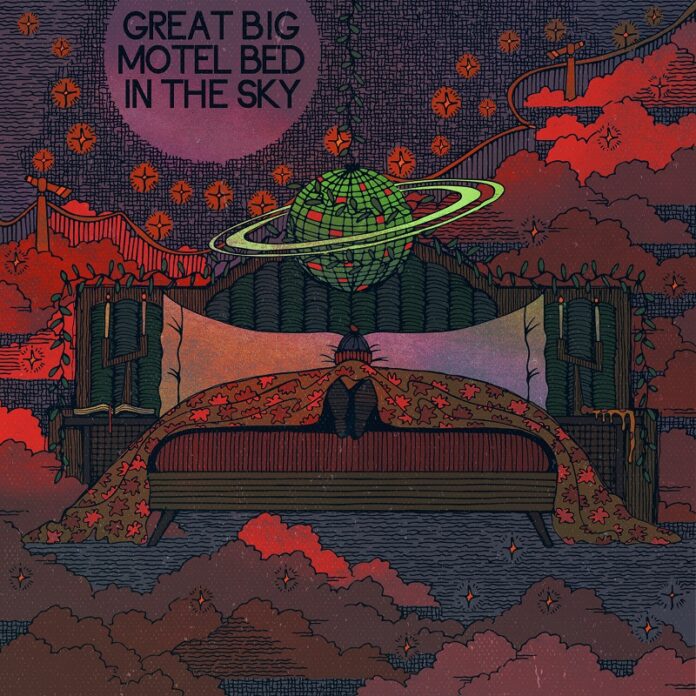 Nathan Kalish is a multi-instrumentalist, producer, engineer, and storyteller. He was born in Milwaukee, WI, to missionary parents and moved around for most of his formative years. His latest album `Great Big Motel Bed in the Sky` is released this month and explores loss and love. Nathan is accompanied on this release by his band, The Derechos who include Adam Kurtz on pedal steel, drummer Danny Pratt , bassist David Guy, Zach Vinson on keys and Adam Meisterhans adding some extra guitar parts and singing backup,

The album opens with`Rich Man’s World` a fairly fast paced introduction with a driving beat that refers to the culture of wealth and power and those who worship it. I really loved `Over My Head` which to me felt as if it had a slight edge to it. There`s a brief guitar solo around the half way point and the pedal steel tinges added a further poignancy to this enchanting piece.

I read that `Past the Everglades` was written about working so hard for something that, after the struggle, you end up feeling like you no longer want it after all. A quite laid back number with a touch of Americana and that sense of introspection. We have another offering that moves at pace with `My Love` which enjoys some corresponding harmonies and intricate piano tinges. A track that reminded me a little of the sadly missed Tom Petty and his song `You Wreck Me`.

`Ballad of Soules` is an absorbing wistful composition that was written from the perspective of Nathan`s late and long-time touring bassist Eric Soules, contacting him from the afterlife (AKA the great big motel bed in the sky). An emotive piece that certainly made me stop and reflect a little after it ended. A brushed drum beat, pedal steel and piano keys lead us through the contemplative and a little at times melancholy `For Katherine`.

`Made Me a Fool` opens with an organ like refrain and becomes a much more pop like tune with a tinge of Americana running throughout. A tale of romantic deceit. There`s plenty of meditation on `Divinity in Lonesome` a thoughtful musing with a musical accompaniment that really reflects the required mood soundscape.

`Unavailable Women` is an upbeat, light-hearted contemplation that makes fun of Nathan`s bad luck with love. The singer felt it fell into a musical style somewhere between Buddy Holly and California country, which is probably a fair assessment. This release closes out with title track `Motel Bed in the Sky` which opens slowly but evolves into an almost full on country shindig.

`Motel Bed in the Sky` was an enjoyable introduction for me to Nathan Kalish and I’ll certainly be checking out his back catalogue. There`s plenty of variety here with toe tappers to some more thoughtful, introspective pieces that will have you taking time out to fully digest.

Nathan`s musical genre has been defined as Cosmic country and to me it`s the kind of country I really like to visit.