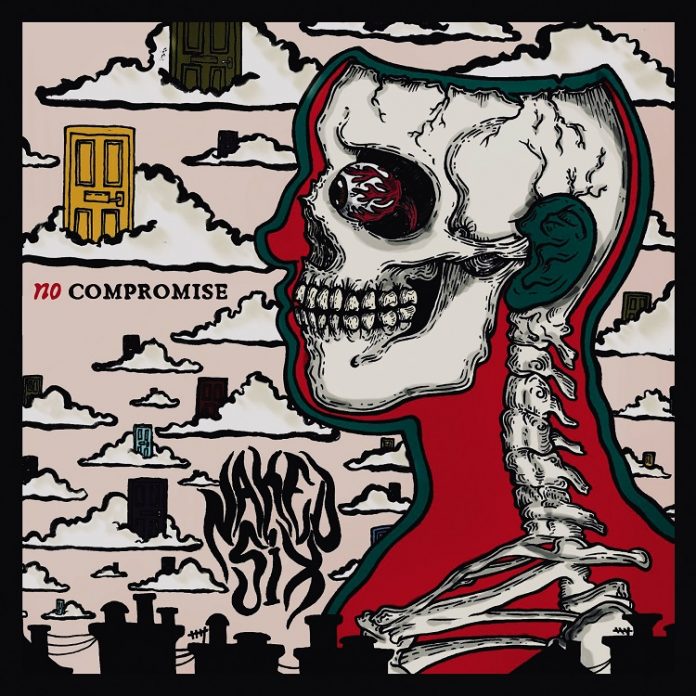 Around a year ago – and my how time flies – I found myself at a tiny venue in Wolverhampton watching The Temperance Movement as they tried out some new material.

The opening act that night was Naked Six. After noting how “raw” the band were and how “primal”, I finally concluded that: “there is every reason to suspect that there’ll be plenty of people trying to explain why “Naked Six” appears in their search history in the months and years to come.”

They only had a couple of singles out then, now its time for an EP. A five-tracker too. And you know what? They still sound like the rawest thing you could find.

It’s right there in the opening of “No Compromise”: “you make me feel like I’m fucking worthless” spits Seb Byford (and yeah, he’s the son of) but it sounds like they’re fighting back.

“Tear Away” is absolutely unhinged. Not since The Vines roared “Get Free” has music sounded like this. The difference between this and The Vines, though, is that this has more than one good song (I know from bitter experience seeing as I bought that Vines album…..).

In fairness too, NS also understand the need for light to go with the shade. There is genuine reflection about “Let It Out”, which deals with the idea of self-belief, with the vigour that only youth can manage: “I am not afraid of dying” sings Byford, before tellingly adding: “but sometimes I think maybe I should.”

“Unwind” recalls early Zico Chain perhaps, while “Who Am I To You” is bluesy, a little psychedelic, even and provides a hint that this is a group that is here for the long haul.

You know when bands say: “we wanted to capture the essence of us live”? Well this one has – it positively crackles.

They are now a three piece with drummer Tom Witts’ cousin joining on bass after this was made. It will be interesting to see how this changes them moving forward. But for now “EP” is a five track statement of intent from a band to watch.