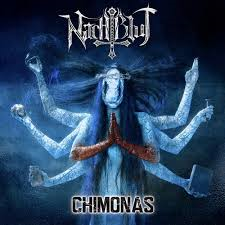 Germany’s favourite sons of darkness return with their fourth studio release Chimonas. They have been pushing the boundaries of Black and Darkened metal from their self-released debut Das erste Abendmahl, which came out in 2007.

The name Nachtblut translates as “Night of Blood”. You may think that’s a suitable name for a Death or Thrash metal band. You would, of course, be correct and there are more than a few death metal leanings here.

The albums have gradually increased in experimentation and they have developed almost a sound of their own. Opener “Gotteskrieger” is a testament to that with it’s almost symphonic opening, which immediately made me think of Ancient Roman-themed Thundergods Ex-Deo, leading violently into frontman, and chief songwriter, Askeroth’s tribal rage.

“Wien 1683” opens up like a black metal 1960’s sword and sandals epic. You could almost picture the pomp and ceremony as the horns and trumpets hail the entrance of the blackened princeps. From there the tone turns from triumph to despair and you get dragged into a front row view of the Battle of Vienna from where the song title comes. It’s as good as anything the band have done to date and a powerful statement.

In terms of similarities, for those who care for such things, in part’s it brings bands like Dimmu Borgir to mind but then at other points you could be hearing new music from some of the more folk-orientated Black metallers such as Winterfylleth.

Not speaking, or even understanding, German, aside from watching the Bundesliga and the occasional spin of a Rammstein record, is no barrier to enjoying this album. In some ways it may even enhance your listening pleasure. I wouldn’t bother reaching for the German dictionary though as this album doesn’t hang around and you may be better not knowing the details of their angst.

Tracks “Marchen” and “Wie Gott Sein” are angry industrial-tinted stomps through the hinterland and all of the tracks to a degree share a  heavy and brooding menace.

The final, and title track, is the most structurally complex of the album and sees the band reach a creative peak. A peak that could last for a number of years. The frozen wasteland soundscape leads into a roaring invasion-like introduction that slows down for a few seconds before getting ready to charge. From there it’s full on metal magnificence that blazes a destructive trail and finishes with a foreboding warning of the horror still to come.

Make no mistake this is one of the most creative and original Black/Dark Metal recordings I have heard in the past twenty years. Of course you could argue about what is original and what isn’t but I would think most metal folk would agree that this is one hell of an album. The production is clean and crisp which allows the band to sound their most sinister and uncompromising.

Napalm Records, a label that knows a thing or two about great music, are rightly proud of promoting this band.

Find out more about Nachblut at:

The album is released through Napalm Records on 31st October. Get it.