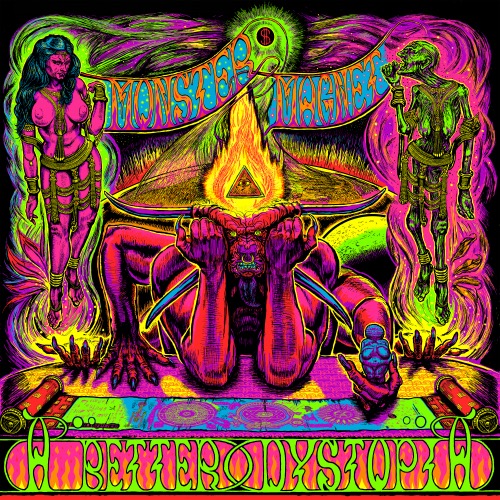 Getting on for 30 years ago these days, Dave Wyndorf managed to make these words into one of my favourite songs.

‘Cause every supersonic jerkoff who plugs into the game

Dave Wyndorf is, in MV’s considered opinion, a genius. Copper bottomed, 22 carat. He’s probably crackers too, but that just adds to his appeal. In recent years, a man who gave the air of not giving a shit, seemingly literally hasn’t either. He’s basically doing what he wants at this point. Sticking out the occasional MM album, then the odd “Redux” version of their old stuff.

And this. Which, despite having no original songs on it whatsoever, is probably the most “Monster Magnet” record ever.

“A Better Dystopia” is a covers record, you see, but it’s a covers record with a difference. This is basically a rifle through Wyndorf’s record collection as he’s dusted off a load of psych and all kinds of weird stuff that you ain’t ever heard of.

To that end. Full disclosure time. I know the originals of one of these – Hawkwind’s “Born To Go” – but that makes precisely no difference, because if you are a MM fan,  let me tell you, you will love this thing.

It begins with “The Dimond Mine” apparently a monologue from one of his favourite DJ’s, but before you’ve had chance to decipher the thought that “he who cradles the rock can certainly roll the world”, you’re into a thunderous “…Go”, which sounds more like Magnet than Hawkwind.

Highlights keep coming at you, “Epitaph For A Head” lays waste to anything in its path, in such a cartoon way that you imagine it shoots deathrays out of its eyes. “Solid Gold Hell” is essentially DW playing out his Jim Morrison fantasies, “Be Forewarned” points out that “I’ve been to bed with many ladies and killed many men, before I turned 16” – proving someone had more fun than me growing up, anyway.

“Mr Destroyer” by Poo-Bah (no, its cool, I’ve never heard of them either) is a mighty rock song, and there’s a glam stomp on “When The Wolf Sits” which rather suggests that everyone was wearing Platform Heels when they made it, which makes the eerie Eastern tinges of “Death” even more impressive.

And that leads me to another point, as it has to be said the band that is Monster Magnet these days is ridiculously good, and ridiculously diverse. Hear them whip up a storm on “Situation”, or letting loose on the garage punk of “It’s Trash” and I dare you to disagree.

The best thing here? Well that’s “Motorcycle (Straight To Hell)” which given that it entails stealing a Vampire’s ride and filling it with the Devils blood, is perhaps the most rock n roll premise of any song, although the fuzzed up “Learning To Die” isn’t far behind, and the bonus track “Welcome To The Void” sounds so high it gets the munchies halfway through.

There’s a reason that I love Monster Magnet so much, though. And its this: strip everything else away and they just make brilliant songs. This collection in other hands, might have disappeared down its own arsehole. The thing about geniuses, is that they understand what not to do. “A Better Dystopia” is the incredible proof.