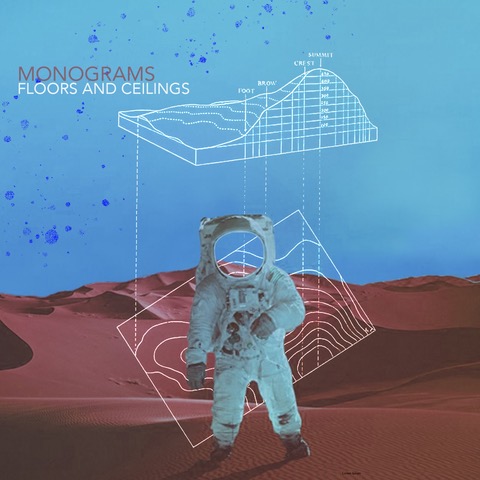 Ian Jacobs is a Brooklyn, NYC artist who has been releasing music since 2017 under the name Monograms. He mixes faded sounds of 1980s, lo-fi and the broken remnants of Brooklyn dream-pop in a genre that he refers to as “nuke wave”. Monograms follows last year’s ‘Only A Ceiling Can Stay Inside Forever’ album with a new 7-track EP `Floors And Ceilings`. This release of new material includes a cover and remixes of tracks from last year’s release by a host of friends and collaborators from the Brooklyn scene including Hiko Men, Dante Fiero and Hexadiode.

We open with `For Safety` which is a really interesting listen. It has a synth like base, occasional drumbeats with edgy vocals shared atop and some delightful guitar riffs that wouldn`t be out of place in a Killing Joke release. The artist has said that “Sometimes I have moments where I’m out and I look around and I can’t believe what the world looks like or how the future still feels pretty uncertain. It can be unsettling”. To me this uncertainty is quite apparent in this number. A song written around the time of the Capitol riots in Washington DC earlier this year follows with `Speak & Spell` and it`s a real meld of sounds with pulsing bass riffs, a constant drum machine beat, unnerving synth swatches and vocals that seemed to be delivered almost remotely as if the singer was distracted. A number that at times sounded like The Cure and then more dream pop like.

To me `Overflowing` was the outstanding track. A wonderfully hypnotic like offering that had me hitting the repeat button again and again. It`s a song that just seems to be of its time and had a sort of charming slacker feel about it. I have to say I never thought I’d hear a cover of eighties pop trio Bananarama`s `Cruel Summer` but I have to say there was much to enjoy with this heavily synthesised version which gives it an appealing new lease of life.

The last three numbers are remixes of tracks from last year`s ‘Only A Ceiling Can Stay Inside Forever’ album. `Lines (Dante Fiero Remix) ` is a slow burn with Kat E leading the vocals with monograms aiding and abetting on harmonies. A song written and recorded originally during the Covid 19 quarantine about feeling like an outsider everywhere you go. It retains that sense of isolation of the original but has some interesting handclaps and a much more synth resonance about it. A number that reflects on the unrest swarming the United States follows with `American Dreamz (Hiko Men Remix) `. Hiko Men is a duo comprised of guitarist-​perfumer David Seth Moltz and percussionist Daniel Mintzer. The danger level seems to have been switched up on this remix and understandably the percussion element is a lot more focussed and wonderfully intense. The vocals when shared had a sort of Ian Curtis / Joy Division texture about them.

This extended play closes with `How To Sleep With Your Eyes Open (Hexadiode Remix) ` Hexadiode (Jonas Miseh and Tim Krug) hailing from Dayton Ohio are a hardware only Electro-Industrial dance act. The guys have taken this track and given it a superb EBM makeover with a really enjoyable slightly harder edge which allows the vocals to flow in, around and over.

`Floors And Ceilings` was a joyous introduction for me to Monograms and the Brooklyn scene collaborators he managed to persuade to work with him, their music and who else they`ve worked with. The tracks have a synth based leaning and could be bracketed chill wave or synth wave so the genre of “nuke wave” that he has coined seems entirely appropriate.

This release times out at under the half hour mark so set aside some space to give It a blast.

It`ll be well worth the effort.