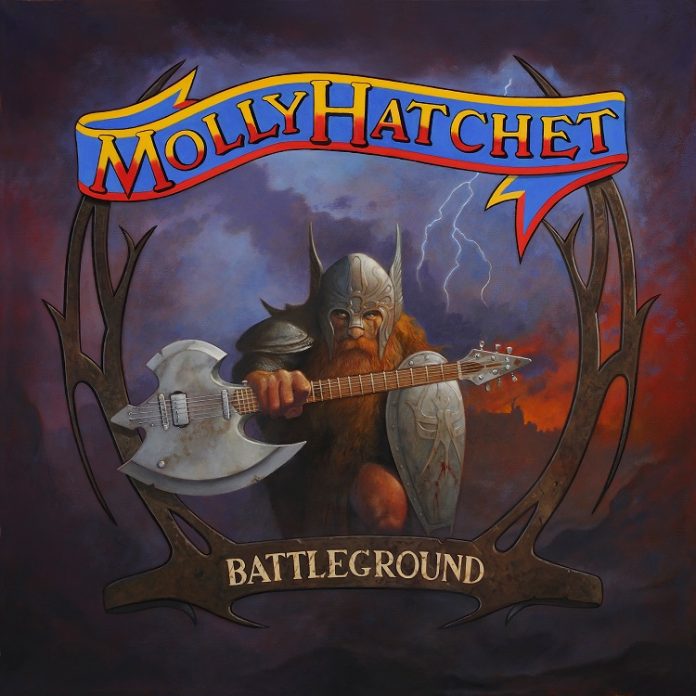 On the sleeve notes for “Battleground”, Bobby Ingram – the de facto leader of Molly Hatchet these days – writes movingly about how much the band’s fans mean to him and how much he loves hearing the stories of how they first got drawn to the group.

So, here’s mine: The Drive-By Truckers.

I love Patterson Hood and the boys. And they’ve got a song which goes: “I never saw Lynyrd Skynrd, but I sure saw Molly Hatchet”.

I am a geek. I check things out. And now I’ve seen both bands. Six years ago – give or take – I went to watch MH and on a forerunner of MV, I pronounced that the gig was “brilliant”.

Mention of the live shows is important, because “Battleground” is a live album, and it’s the first to include Jimmy Elkins as singer after the passing of Phil McCormack, who had done the job so well the night I saw them (founder Dave Hlubeck has also died since then too), but like Ingram says, Elkins has the Southern Rock gene, and he is perfect here.

Indeed, this 90 minutes or so, to be honest, is perfect southern rock. There’s brilliant playing – John Galvin is stunning on the keyboards, never mind Ingram is a guitar gunslinger himself – there’s fabulous songs, and there’s just a hint of the outlaw spirit. “Did you know $500 will get your head blown off?” sneers Elkins in the opening “Bounty Hunter”…”well it will….!” And it sounds like he knows what he’s talking about.

“Whiskey Man” adds a harmonica lick so dirty that you probably need to scrub it with a wire brush afterwards, and “Why Won’t You Take Me Home” is swaggering, blue collar celebration from the top drawer.

The next two, “Son Of The South” (no shit….) and “American Pride” are exactly what you want. The stylised view of the US of A given to us by the likes of The Kentucky Headhunters, the aww shucks, hospitality and the music. And yeah, we might not have the same views, but that music is a unifier.

What MH do have this a varied sound – or certainly a more varied one than they get credited with. “Edge Of Sundown” and “Fall Of The Peacemakers” are epic and nuanced, “Devil’s Canyon” on the other hand is a southern rock masterclass.

This is a two-disc set, and the second half has some huge, labyrinthine belters. “Justice” does its thang for over eight supreme minutes, sort of like if Magnum had been from Florida rather than the West Midlands, and “I’m Gonna Live Till I Die” is both poignant given the history, and stoic given the future.

And, fair enough, it sounds a bit like Skynyrd and The Allmann Brothers, but you know what? Who cares when songs as fun as “Jukin’ City” are the result?

They have their own style anyway, as “Dreams I’ll Never See” and its chunky riff show, and “The Journey” is as unapologetic as it gets and when Ingram does that solo, lets be honest, everyone’s thinking “Freebird”, aren’t they?

It ends, just like the night I saw them did, with “Flirtin’ With Disaster” and that’s just fine, but as much as it was DBT that got me to Molly Hatchet, it was actually Bon Jovi.

I’ll explain. 10 years old, nearly 11 in 1986, when “Wanted (Dead Or Alive)” came out, I was obsessed straight away with the idea that a rock n roll band were the cowboys, and ones who rode a steel horse to boot.

34 years later, I still am. Here’s to the ones who’ve seen a million faces and rocked them all, no doubt. Everything on “Battleground” is the reason why Molly Hatchet rule.