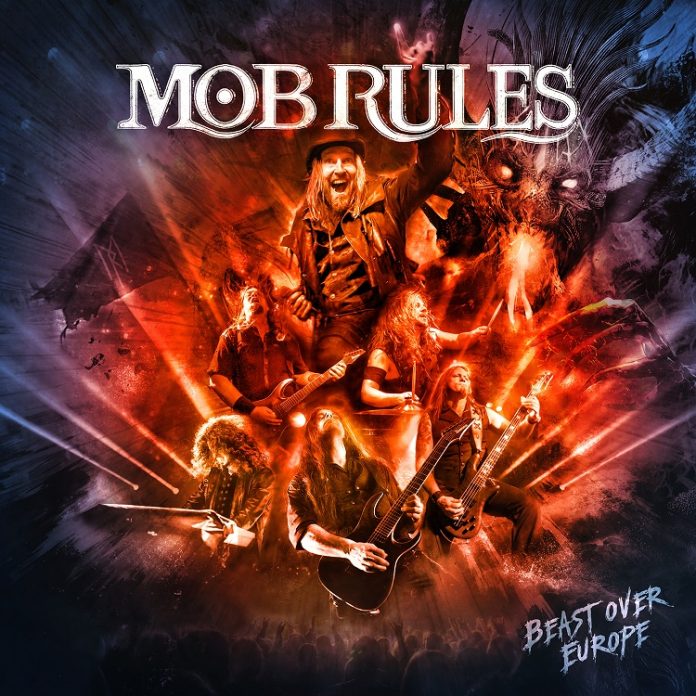 Mob Rules singer Klaus Dirks’ voice is full of delight: “It’s our first tour in the UK!” He exclaims, before they play “My Kingdom Come”, “and its really great here!”

That enthusiasm, actually is what comes over throughout “Beast Over Europe”. The German’s probably should have made it over here before that, given they have been knocking out some serious power metal since the late 1990s, and yet here they were.

Some of the shows on that run were supporting Eden’s Curse. I saw them on one of them, back in the spring and remarked at the time on the review: “if you’ve waited all night for a fists in the air thing to happen, then “Children’s Crusade” ensures you wait no longer. “On The Edge” exemplifies what a fine band they are, and whilst “Hallowed Be Thy Name” isn’t a Maiden cover, it still is as metal as Eddie The Head’s codpiece. So are Mob Rules.”

A throwaway line perhaps, but one which rings true listening to this full length CD rather than the 45 minutes they played that night. Mob Rules are a metal band, who lives to play metal and is very good at it.

“Ghost Of A Chance” – and if there’s Maiden references all over this then I apologise, but it seems kind of apt – gallops along like something off “Seventh Son…..” and they do epic and atmospheric well too. “Somerled” has echoes of their fellow countrymen Freedom Call, and honestly, this is as classy as melodic heavy metal gets.

The rest of it doesn’t much stray from the path either – and you can imagine that this really is the sort of band for which denim and leather truly brought them altogether – but they are capable of whipping a real epic storm when they fancy it. The Gregorian Chanting on “Black Rain” sees that one come from a dark place, while “Sinister Light” – from their 2017 record “Beast Reborn” – has a flavour of Blaze Bayley about it.

The labyrinthian “Dykemaster’s Tale”  – and lets be real here, this intro is “These Colours Don’t Run” – is a wonderful centrepiece. Over nine minutes of glorious, slow-building heavy metal, and fists? Well, they’re up in the air for “The Last Farewell” which injects plenty of urgency.

The race to the end – and this is a well-paced set culled from various shows – is best exemplified by “On The Edge” which sees the keyboards of Jan Christian Halfbrodt right to the fore on a Deep Purple-esque romp, and while the encore of “Way Back Home” injects a little more modernity, then be in no doubt, this is a band that does what it wants and loves what it does. “Rain Song” the closing thing here proves that, and you can bet in their native Germany (where “Beast….” Crashed into the top 40 with no bother at all) this has them swaying in the isles.

“Beast Over Europe” is a fine document of their first UK tour to go with some of the hundreds of shows they’ve played all around Europe. You can imagine these boys grew up listening to the likes of “Live After Death”, and now they can say they’ve got a live album to go alongside.