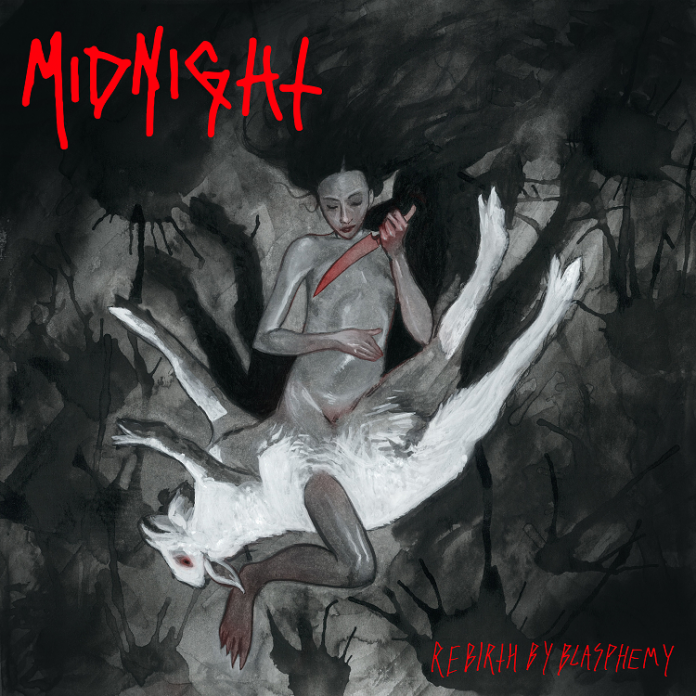 I took one look at the cover for “Rebirth By Blasphemy” and thought: “yep, this is going to be black metal.” Then I had a look at the song titles.

The first one is “Fucking Speed and Darkness” then there’s also  “Devil’s Excrement”, “Rising Scum” and “Escape The Grave” amongst others.

And I thought “yep, this is going to be black metal”.

Shows what I know, really. Which, as the theme tune for Henry’s Cat, put it so memorably on the children’s cartoon I used to watch growing up, is everything about nothing and not too much about that….

So we’d best backtrack a little.

From the get go, the vicious “Fucking Speed And Darkness”, this is clear about what it is. It is unapologetic, heavy, but actually, it’s catchy. Ok, so he’s spitting the lyrics at you like they’ve come from hell itself, but they aren’t growled. They are sung. And you can – if you so wish –  sing along.

That’s true everywhere, and it sounds on the title track, as if he’s decided that Iron Maiden’s debut wasn’t punk enough, so he gargles sandpaper and sets that right, “Escape The Grave” likewise just gallops. To wherever. It’s not bothered. And, by this stage neither are you. You’re either in this fanclub by now, or you’ve turned off. I am betting there won’t be any in between.

“Devil’s Excrement” sounds pretty much like you imagine it’s going to – and the guitar lines are so sharp, they’d hurt like hell if you shit them out – but then, excrement is central to this. As Midnight points out himself, when writing the album, he “ended it again with complete and utter disgust for humans in general, but then you want that to come out of you. Just like you take a poop and you take a pee, you want the rotten shit to come out of your body, because if you keep the rotten shit in your body, it’ll rot you internally.” (these are genuine words from an interview he did for his record company)

That, really is spot on too.

The aforementioned “….Scum” hammers out its Priest fantasies, while “Warning From The Reaper” starts with a solo, so gets bonus points, because ace songs always do, and is glorious, unreconstructed and vile heavy metal.

Two minutes of bile is dressed up as “Cursed Possessions”, and “Raw Attack” – never has a song been better named – dials it up even further, and rubs salt into the wounds for good measure, just for fun. It does sound a little like a NWOBHM track, but only if Motorhead were playing it with Slayer.

“The Sounds Of Hell” is another blitzkrieg raid, and lets not pretend that this is nuanced or does light and shade, because it doesn’t. It’s glory, really is that it never bothers to be polished, finishing with “You Drag Me Through Fire” and sounding like it would enjoy the experience.

Often I use the phrase “Arena Ready” in reviews. This is the antithesis. This sounds like a metal band doing demos, that they’d have been scared to put out because they were too raw. Arenas? This is ready for the underground dungeon. Warts and all? Doesn’t cover it. This is a weeping sore. There’s a moment before the solo in the last song where Athenar yells: “burn you bitch!” and it is the most metal thing for years.

“Rebirth Through Blasphemy” is just amazing. Take that however you want to.