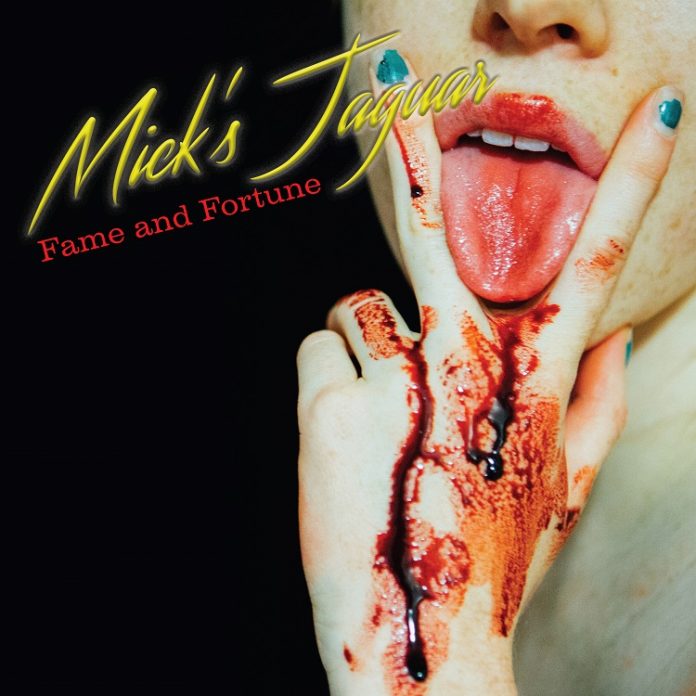 If I told you there was a band that was equal parts AC/DC, The Stones, Thin Lizzy and New York Dolls, the chances are you’d think I was a liar. And then you’d probably want an invite to one of their after-show parties.

Well on the first point, such a band does exist. They’re called Mick’s Jaguar. As for the second, I have no idea what their parties are like, but I’ll have a guess based on the fact that the entire album reeks of sex, drugs, rock n roll. As well as all kinds of violence.

In short, it’s all rock n roll is supposed to be.

The name probably gives it away, but Mick’s Jaguar used to be a Rolling Stones tribute band, and whilst there are only hints of Keef and the lads – but then all great rock n roll should have hints of the Stones – there is plenty of swagger.

What else, other than swagger, would you call a chorus that cheerfully suggested: “The Pope’s in the waiting room/Jesus on the cross/ Satan’s on the telephone/ but I am the real boss.”? That is how the opening song here announces itself. And in so doing it is just about as catchy as anything ever has been.

“Pay To Play” has a touch of AC/DC about it, and a more metal outlook, but all through the prism of punk and an eye for the ladies. MJ sound like the sort of band that would disappear with your mum or your sister – and preferably both. The lead guitar here is as sleazy as anything 80s rock ever had.

“Where We Go” is absolutely insistent that you should be in its presence. “Think about murder eight hours a day” is more than a killer hook line  – it is me and no doubt you at work. And it’s our anthem.

There is a brief pause for reflection on the melody-packed “Here Comes The Night” with its soulful backing vocals: “all my friends have daughters and sons” sounds like a grab for maturity, “Blood On The Snow” (three guesses what it’s about) is all the proof you need that being mature is overrated. It does, however, have a huge groove and a hypnotic conclusion.

“Hellride” is The Georgia Satellites looking for trouble in a whore house, while “Damnation” which namechecks “Let It Bleed” and “All Right Now” as well as Sabbath, knows its history, and whilst Jason And The Scorchers might agree with the sentiments of “Country And Punk” even Ringenberg himself wouldn’t sound this unhinged.

“Call The Guy” is simple, blue-collar rock n roll, like Jesse Malin turned up to 12, while the brilliant “New Orleans Blues” with its harmonica led licks sounds more laid-back than most here, but then everything needs to recover, right?

Whether “Fame And Fortune” brings Mick’s Jaguar either is open to question – it’s probably best for their health if it didn’t sell to be fair, as they’d doubtless blow the whole lot on hookers and blow – but it deserves to. Few albums distil the long-forgotten spirit of rock n roll as well as this one does.