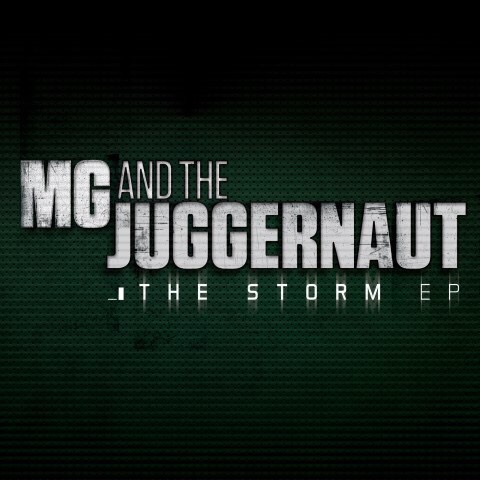 There’s definitely something happening on the South Coast. Recently we’ve had three stellar releases from bands from the area reviewed on these pages. Voodoo Vegas and Kodiak Jack were keeping the hard rock flames burning, Hummune were doing something a little heavier and downtuned, and now there’s “The Storm” the second EP from MG And The Juggernaut.

Confession time. Upon seeing the name when it landed in the inbox at MV towers, this reviewer was fooled into thinking it belonged to some kind of country inspired hard rocking, whiskey guzzling outfit.

Instead MGJ, as we are going to call them for short, are one of those bands that’s particularly hard to quantify and get a handle on. You can listen to the opening strains of “Kaiju” (translation: strange beast) and think it’s some kind of Tool type affair, but by the time it’s chorus has hit, you are left looking for your early Therapy? albums.

One thing, however, is for sure, this Juggernaut they are driving around is big. They intend the thing to crush whatever is in its path. The middle track of this really interesting trio is “Sorry” and pleasingly it doesn’t conform to any sort of pattern either. A huge, ambitious soundscape with some massive riffery juxtaposed with some really pleasing quiet sections, it is topped off with a fine solo from guitarist and vocalist Simon Miller.

It’s worth pointing out that “The Storm” was mixed by Acle Kahney who has piloted the good ship Tesseract for over a decade. Never a band to do what you expected, he twiddles the knobs here to great effect. The last piece of music (you can’t really call it a song) is “Leveller” and even for this record it’s a left turn. A thumping instrumental save for the chanted line “Why won’t you break me down” it is an oddly disconcerting track. It adds to an EP which is full of surprises and choc full of ideas.

MG And The Juggernaut have created quite a ride.

Previous article
Forging Ahead
Next article
Get Into The Real World