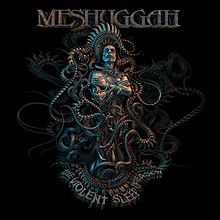 The Swedish extreme metal doyens return with their views on the current state of the world.  Close your ears if you don’t want to hear the truth.

It has been nearly 30 years, 29 if you wish to be precise, since the formation of the Swedish extreme metal institution that is Meshuggah.

Eight studio albums in and it sounds like the band are just about hitting their stride.  Of course, the band have been celebrated, quite rightly, and held up as pioneers in their chosen field.  They have influenced countless bands over the years with their experimental and technical approach to the often standard extreme metal of the 1990’s and 2000’s.  From 1991’s thrash-tastic debut album Contradictions Collapse through to 2012’s avant-garde Koloss the band have constantly evolved their sound and pushed themselves forward into unchartered territory in the search for uncompromising truth and progressive intensity.

Fans of the band’s technical accomplishments might mention polymetered song structures, polyrhythms and all manner of complex musical descriptions to explain how important and vital this band have become to the evolution of extreme music.  When we get down to brass tacks however, we find that it is simply great musicians making great music that strikes a chord within the blackened heart and darkened souls of the listener.

Frontman Jens Kidman has been an ever present since the band’s inception in the town of Umea in northern Sweden, incidently popular post-metallers Cult of Luna also hail from the same area, and along with guitarist Fredrik Thordendal has been instrumental in keeping the Scandinavian’s ahead of the chasing pack.

Those unfamiliar with the bands work could do much worse than start with the seven minute album opener “Clockworks” by way of introduction.  Thunderous drums and low razor-riffs heralded the next stage of their career.  Kidman’s vocals throughout the album offer a restrained ferocity that allows the music to take centre-stage but on this track inparticular he provides a tortured narrative.

“Born in Dissonance” follows immediately and intently.  It’s a cut from the same cloth as it’s predecessor, a benefit of the band recording the album live, and is approaching classic Meshuggah.

Given the band explore and adopt many textures in their music there are a few moments of  subtle beauty amongst the orchestrated chaos.  The conclusion of “Stifled” being the most stark example of the ethereal Floydian quality that occasionally comes through in their music.

The album really takes off into another gear with the brilliant title track.  A near seven minute journey into a twisting and distorted maelstrom of controlled creativity and wilful abandon of convention.

Thordendal’s solo’s on this album are one of the most otherworldly guitar works this (dark) side of Joe Satriani.  This is allowed thanks to the poundingly rhythmic duo of drummer Tomas Haake and bassist Dick Lovgren.  To forget the contribution of rhythm guitarist Matren Hagstrom would be criminal as his pacey and dynamic riffing allows Thorendal to explore his considerable fretboard talents to the full.

“Into Decay” closes the album in the same penetrating fashion as the opener.  The grooves are slow but deep and the message received and understood.  Meshuggah are reaching their peak and there are precious few bands to match them.

Whilst the past three decades have produced some outstanding albums, the previous two of Obzen and Koloss being chief amongst them never have the band sounded more comfortable in their own skin.

Previous article
(Another) Six Bands
Next article
Strung Along