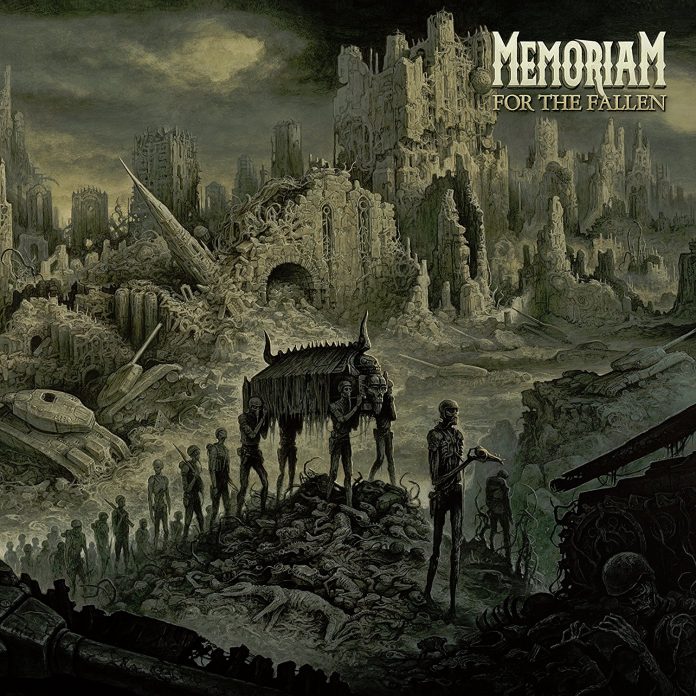 Midlands extreme metal stalwarts combine to pay the ultimate tribute to a fallen brother and celebrate life through death.

September 14th 2015 was a hugely significant day for the band that would become Memoriam as tragically it was the day that longtime Bolt Thrower drummer Martin “Kiddie” Kearns unexpectedly passed away aged only 38.  The band felt they could not continue after the loss of such an inspirational and vital member of the band and called it a day shortly after, advising there would be “no reunion and no compromise”.

Once the initial shock had subsided vocalist Karl Willetts and former BT drummer Andrew Whale joined forces with bassist Frank Healy and guitarist Scott Fairfax from fellow Midlands death metal titans Benediction to honour the memory and create powerful new music under the banner of Memoriam in January of 2016.

Initially they played covers of tracks that had influenced them over the course of their careers but it soon became obvious that they there was some greater to be gained from concentrating their efforts on creating new music.   Throughout 2016 they were busy recording demos, which would later become the “Hellfire Demos 1 & 2”. Those impressive demos are now fully realised and the impact is immense.

The album opener “Memoriam” is a shortened blast that gives a unsubtle indication of the style and substance to come. Thick , well constructed, bruising riffs backed by hammering drums and deep bass lines.

Former British Prime Minister Neville Chamberlain’s “Declaration of War” speech from 1939, following Germany’s invasion of Poland that began World War II, introduces the track “War Rages On”. If the word “barnstormer” had not already been in use then this track would have been a good time in which to create it.

After a couple of slow burning doom-laden death metal tracks it is a much welcomed up-tempo number in “Corrupted System” that frees the shackles and rages with almost carefree, but controlled, abandon. It’s only a quickstep away from a heavy punk vibe. Likewise “Flatline” holds nothing back and goes for the throat like a rabid dog.

There is a familiarity and consistency about the album but it’s not without it’s surprises a curve balls. The closing track “Last Words” is an eight minute grinding lament of memories and brotherhood which mixes the slow laconic heaviness with the thrust of a thrash band in full flight before returning to a crawl into the desolate land.

Fans of Bolt Thrower & Benediction will find much to enjoy and savour on this album which is a very fitting tribute to Kearns and the energy and power of the material shows that this could well be far more than a one album tribute but could see Memoriam become something more permanent and long-lasting just as BT and Benediction. That would indeed be the ultimate tribute.

The band will also be touring the UK in 2017 with more dates to be announced in due course, but the dates confirmed so far are as follows: