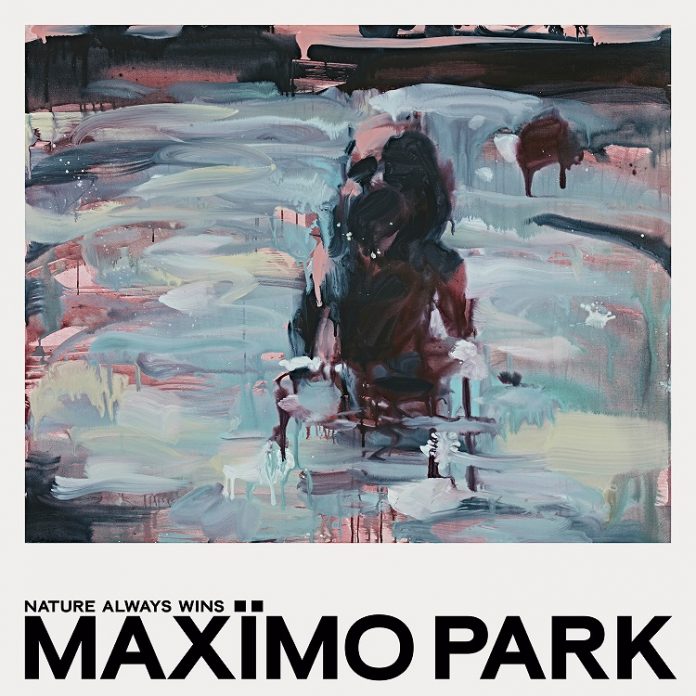 Maxïmo Park are an English alternative rock band, formed in 2000 in Newcastle upon Tyne.

The band have been reduced to a trio consisting of Paul Smith (vocals), Duncan Lloyd (guitar), and Tom English (drums) as founding member and keyboard player Lukas Wooller decided to emigrate to Australia. A band that are a little difficult to classify but engage elements of Indie, post punk, alternative rock and electronic rock. They release their seventh album “Nature Always Wins”, written and recorded during lockdown and their first since the politically tinged “Risk to Exist” four years ago. This album tackles themes inspired by the anxiety of fatherhood, the realities of disaster and terrorism, and the treatment of ethnic minority groups.

The album opens with `Party of My Making` an anthemic and upbeat number with a repetitive synth beat and vocals that sway relating the acceptance of the aging process. A really catchy track that will be a live favourite. There`s a slow build to `Versions Of You` which then really becomes quite expansive with pounding drums and thumping bass setting a pace for the delivery of some briskly shared lyrics. It had a slight feel of the sort of vast, sweeping numbers that The Killers are renowned for. Wonderful stuff.

`Baby Sleep` is a strange one. Another song that is quite poppy and has the lyrics fired at you. A track that come together as the singer adapted to life at home with his young daughter during lockdown. A light-hearted look at the surreal nature of sleep-deprivation. I found the singer`s slight North Eastern accented twang added so much to the pleasure of this piece. We enjoy some intricate guitar chords and riffs on `Placeholder` a fast-paced composition that was a real foot stomper.

`All Of Me` is an inspirational anthemic aria with a driving drum and bass line and a flowing synth that flits in and out allowing the resplendent vocals to shine. A reflection on where the narrator is in his life and has accepted that with his and his loved ones it`s not such a bad place. There`s more of a full-on rock out with `Ardour` whose lyrics have as  much passion as its title. There`s an appealing singalong chorus with “it`s easier said than done”

`Meeting Up` seems to race along at pace with an electronic melody and driving drum beat. The vocals seem to sit back slightly to allow the music to wash over and almost mesmerise you. Another expeditious track is shared with `Why Must A Building Burn` which was partly inspired by the Grenfell tragedy and a commentary on the current state of our Nation and its attitudes.

`I Don`t Know What I`m Doing` relates to how the worry of adjusting to becoming a father affects your life, the pounding drumbeat and edgy guitar riffs seemed to tip a nod to the heady days of Gang Of Four and Talking Heads. We have a quite eclectic piece with `The Acid Remark` which seems to almost stop and start at times as it progresses. A quite art-rock kind of excursion.

`Feelings I`m Supposed To Feel` has an almost energetic disco dance vibe with some quite self-reflective and contemplative lyrics. The album closes with `Child Of The Flatlands` a reminiscence on growing up and how things have altered not always for the better. A very atmospheric nostalgic rumination shared in a nigh on spoken word offering.

This release is an Introspective meditation come analysis on the many aspects on what life throws your way that comes from a sense of maturity. The songs shared are at times uplifting, thought provoking, varied and thoroughly captivating. A cathartic life musing that has come out of these difficult times where we are locked away in a global pandemic.

As the title alludes to “Nature Always Wins”