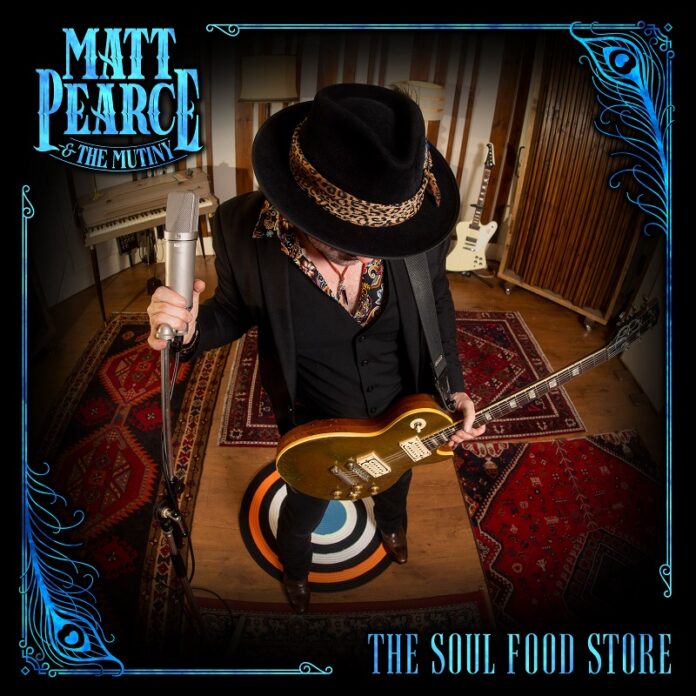 Back in 2019, the debut album from Matt Pearce and The Mutiny came as something of a surprise – perhaps even to the band.

A recap. A founder member of Voodoo Six, Pearce’s solo endeavours were instead a rollicking bluesy, chunky menu topped off with a massive dollop of funky soul to taste.

Its actually one of those rare records too. It got better with time. I gave it 8/10 back in the spring of that year, and it might well be better than that (Sorry Matt, part one.)

Which brings us to “The Soul Food Store”. It emerged in April (sorry Matt, part two) and expectation – certainly in these parts – was higher than it might have been. That comes with a problem. I mean, like even Shinedown released one half decent record (no, really, they did. The one with “Devour” on) but only great bands do two on the trot.

On that basis, then, its perhaps time we start calling MPATM a great band. Lets be clear on this, “…..Store” takes everything that was great about “Gotta Get Home” and dials it up a notch.

Whatever, the whole thing is a soul filled booty call, and Steve Beighton’s sax (honestly, his best Clarence Clemons licks) steals the show. That, more than anything perhaps, underlines that this is a band, and it feels like the most organic of records.

It is impressive (and the same was true of the debut) how much ground this covers. “All The Gods” is a much more conventional blues number – albeit a superb one – but it surely can’t just be me that was reaching for Santana records after a listen to “Promised Land”.

The length of these songs is important too. The Beatles flavours of “Bring It All To Me” are typical, but the band allows the music to develop perfectly over six and a half minutes. This is not prog, but neither are these short and sharp.

It’s tempting to imagine Matt as an old time band leader. “Is everybody ready?” he asks before the swinging “ From Here To The Moon”. Perhaps the highlight amongst many, if for no other reason that it sounds like it could have come out at any point in the history of recorded music and still sounds fresh.

The title track (it’s name might sound like a vegan restaurant, but its far tastier) floats away on the summer breeze, and given that I am typing this on one of the warmest evenings of the year, its shimmering gentle vibes are perfect. Special mention to the organ of Joe Moody here.

“Don’t Take It So Hard” is a more straight ahead strutting rocker, before the skill of the band takes it somewhere else altogether. “Never Get Away From Love” corners the market that King King used to call their own, and “A Better Way” owes more to Dan Reed Network (and perhaps, therefore Prince) than it does to anything else here. A sort of bookend, if you will. Those three songs, taken as one whole piece are the kind of melting pot that this is about.

More than anything, this is just a warm, welcoming record. Close your eyes and you can put yourself in a New Orleans jazz club as “Beautiful Disguise” plays. At the end of the night as the staff are clearing away. It exists in its own time.

“King Of The World” ends things like it has trouble to cause. “That’s all” offers Pearce at its end. Except it isn’t, not really. This is a record to lose yourself in, a place where everyone is welcome and – like the theme of Cheers – where everybody knows your name.

Matt Pearce reckons he wanted to make a collection with no negativity. In “The Soul Food Store” he’s made one that you can’t be negative about. There’s no cynicism, no anger no hint of nastiness here. It’s just a brilliantly lovely album.