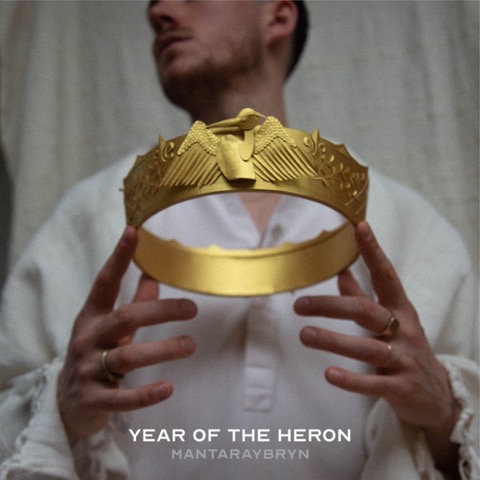 Welsh/Cornish artist Mantaraybryn or Bryn Evans has a new three track EP out this month with `Year Of The Heron` and it`s his first music for nigh on three years. This new release is about “coming-of-age and coming-out”. It touches on themes of mythology and sexuality, self-exploration and solitude and marks a step forward for the artist

It opens with `Into One Ether` an electro pop aria which the singer has said “It’s about being alone after being with someone, not knowing which version of yourself to present, being with anyone just to not face silence”. Ether is the element that connects us to spirit, intuition, other realms, and planes so maybe his choice of this organic compound is quite telling. The track has a repetitive hypnotic beat with vocals floating above and i`m sure will be a floor filler in a late night club. We have a commentary on the short-lived nature of modern dating with `Mayfly`. It`s a more of an introspective reflective composition with floating synth keys and quite wistful almost preoccupied vocals. The mayfly has come to symbolise the inevitability and briefness of life so again another possibly significant symbolic choice of title.

`Tantalus` closes out this submission and it` a tale of unrequited love. It references the character Tantalus from Greek mythology who is imprisoned and lives in perpetual thirst and hunger. Bryn admitted that “I used that as a metaphor for an ex who I can’t be with but who I still torture myself by seeing”. It`s a quite anthemic piece which begins quietly with just vocals and tinkling piano keys and builds and grows with some delightful backing harmonies. A track made for singing and shouting along to.

After reading about Mantaraybryn, it would seem that `Year Of The Heron` has emerged from a deep period of dawning realisations and sexual orientation for the singer and is a sort of rebirth, a fresh start and a new chapter so choosing a heron in the title which represents strength, purity, patience, and longevity is quite apt. There will obviously be comparisons made to artists such as Patrick Wolf and Years & Years but he has a style and charisma all of his own.