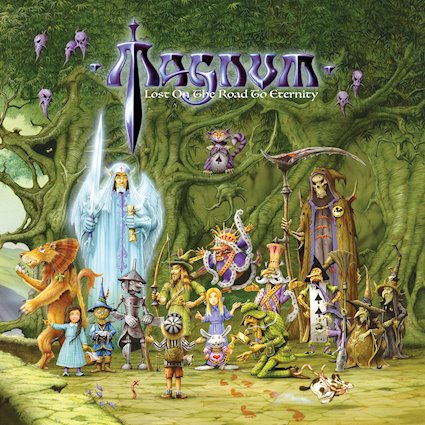 You wouldn’t want them any other way

With “Lost On The Road To Eternity”, Magnum have reached the landmark of 20 albums. And in that time, since their debut record 40 years ago, they have earned the right to a “signature” sound. Only the best have one. AC/DC, Thin Lizzy, Iron Maiden, and a few others.  Magnum not only belong in the Premier league with those type of bands, but you can put a Magnum collection on and it sounds like ….well, Magnum.

Album number 20 starts with “Peaches And Cream” and it takes barely a second to get into the groove, and we can say with absolute confidence that it is business as usual.

Actually, on this occasion this wasn’t quite so much a given as it usually is. If pretty much everything they’ve touched since reforming at the start of this century has turned to gold, then before this one, there were some bumps in the road.

This is a new look band that features two new names in keyboardist Rick Benton and drummer Lee Morris. Replacing such an integral keyboard player as Mark Stanway and a drummer of the calibre of Harry James is no mean feat, but these two have done it – and indeed Benton is absolutely to the fore throughout, from his Jon Lord type flourishes at the end of “…Cream” onwards.

The album is a lengthy affair (the opener is the only sub-five-minute song here – and then only by a few seconds) the journey continues with “Show Me Your Hands” which knocks you off-guard with a real electro section before the end, and “Storm Baby” which does the slightly epic but never all out bombast thing that latter-day Magnum can always manage, and it is clear this is an 11 songs which is shot through with class.

“Welcome To The Cosmic Cabaret” is as grandiose as its title suggests, but moreover proves two things. 1) That they have a total mastery of their craft and 2) that guitarist Tony Clarkin must be one of the most underrated around.

When singer Bob Catley isn’t fronting Magnum as only he can, he is often found as one of the vocalists in the incredible Avantasia. That band’s mainstay Tobias Sammet returns the favour by appearing on the quite brilliant title track – which with its classical elements wouldn’t be out-of-place on an Avantasia opus.

The first single, “Without Love” is a little bit of a change. A real rocking rumble of bass and drums it has its fists in the air from the off and would be a stadium filler in a parallel universe.

“Tell Me What You’ve Got To Say”, which kicks off with a keyboard riff, also has a touch of a NWOBHM gallop in its verse, and if it is played live it will sound superb. “Ya Wanna Be Someone” is a push and pull of chug and harmony, “Forbidden Masquerade” is built around its fine backing vocals at the end, and “Glory To Ashes” not only has a stridently piercing lead,  it seems to have a real serious message as well as some fine poetic vocals.

The closing “King Of The World” – another epic at over seven minutes – has some understated bluesy licks, and very much sounds like it belongs on the soundtrack for some glitzy fantasy movie. It gives this particular quest a fitting conclusion, anyway.

As ever, this was dreamt up by Clarkin, who has stated his aim thus: “I go to the studio ….and do my damnedest to write the best Magnum song of all time.” That doesn’t allow for the fact that Magnum don’t do bad records. Where this specific one lands in their canon is for the future, for the present, we can say that “Lost On The Road To Eternity” does all you expect and just a little more.