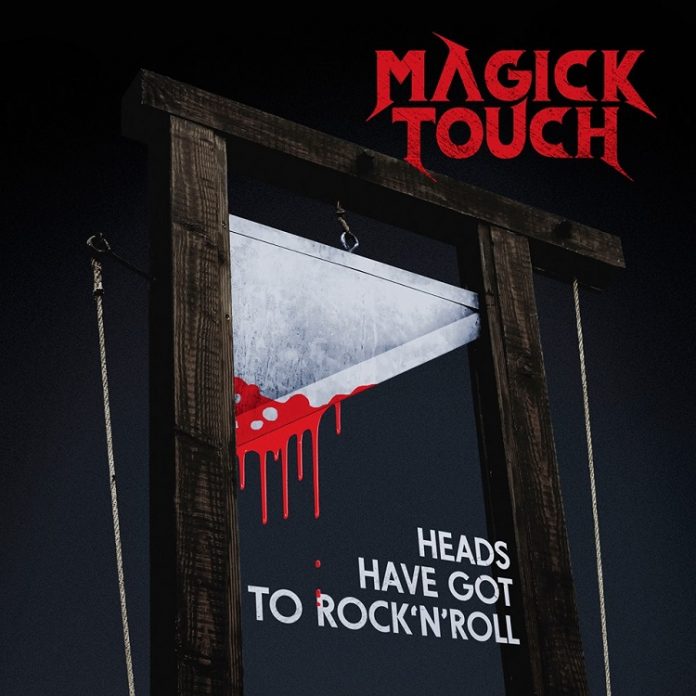 Sometimes, I feel I’ve already used up my best lines.

Take Magick Touch, for example. Getting on for three years ago I reviewed their second album. And I wrote a huge thing about how I thought with a name and the artwork meant they were one of those boring occult metal bands, but over the course of the album I’d realised they weren’t.

I concluded thus: ‘“Blades, Chains, Whips And Fire” is one of those albums that thinks that just because you might not end in arenas playing your music, that is no reason not to dream.”

In many ways I could recycle the same thing about “Heads Have Got To Rock N Roll”, except for one key point: Magick Touch deserve better because it’s a better record.

I mean, by an large everything I liked about the last one (primarily it is a Scandi rock take on Thin Lizzy), is still here, its just that everything from “(This Isn’t) Your First Rodeo” onwards is just a little bit better than it was before.

The choruses, the riffs – “Watchman’s Requiem” being a prime example are pure Blackmore, the solos soar. It’s clear that HK Rein has done some kind of deal with the Devil and moreover that the Dark Lord might have got the shit end of it.

Everything about this sounds like its ready to rumble. “To The Limit” which is so proudly AOR in a way that only bands from Scandinavia can seem to be. Chest beating, bombastic and thumping, it is only bettered by “Love Is A Heart Disease” because, first that one masters the craft and second it has the best nod to W.A.S.P in years.

There is a feeling about Magick touch that they just don’t care. That’s not to say they aren’t serious about the music, more that they don’t care about how they are supposed to sound and deftly switch. “Ready For The Quake” is blues in the style of the classic Bernie Marsden era, while “Phantom Friend” has a bit of a stab at “doom” if you like, but it’s the same flavour as our fave’s Stone Axe, who I implore you to listen to after you’ve acquainted yourself with MT.

“Bad Decisions” is so Thin Lizzy even Black Star Riders will be looking on enviously, “Waiting For The Parasites” fancies a stab at metal, so it has one, in a Saxon type way, and “Daggers Dance” is a song so timeless it could have come out at any point in the history of rock and not been out of place.

There is even the type of dark occult stuff that I’d thought might colour the whole band at one point before the end, “Doomsday I’m In Love” (and the title’s of the songs on here are nearly as good as the tunes themselves) is so well done though, that it is merely proof that whatever Magick Touch do has some kind of magic dust.

“Heads Have Got To Rock N Roll”? They don’t have an option, really. This is so varied that its like one of those free compilation CD’s you used to get on magazines. It’s just that this is all the same band.

Previous article
BAND OF THE DAY: THEY CALLED HIM ZONE
Next article
BRAND NEW SAGA