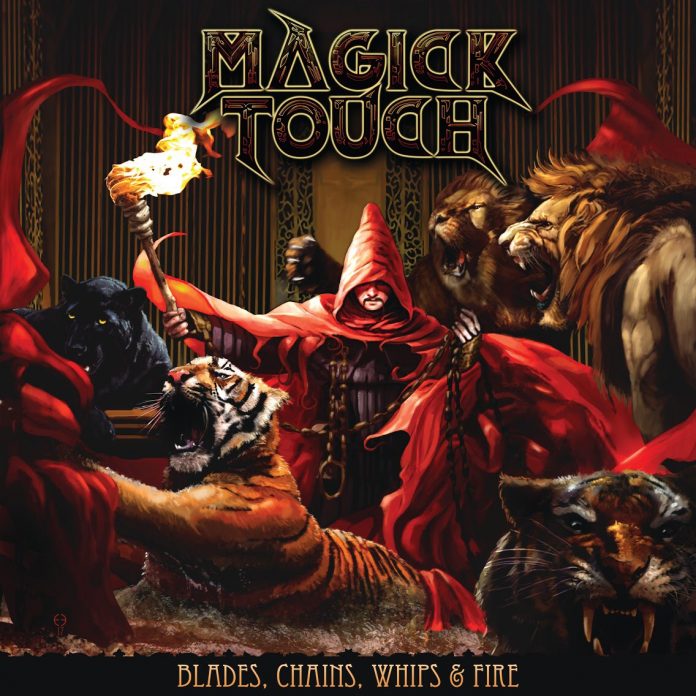 Don’t judge a book by it’s cover. Or something

As we’re amongst friends here, MV will make a confession. We took one look at the cover for this record and didn’t expect to be reviewing it. The band name, the illustration, the title, we’ll be totally honest, it just seemed like A.N other power metal band.

The band bio helped. A trio. Great, always fun. Then there were the influences. Gorham and Robertson. Ok, now we’re interested.

Whoever knows what they put in the water in Scandinavia can they come and do it here too, please? Because Magick Touch are another of those bands from that part of the world (these particular reprobates hale from Bergen in Norway) that just rule from the off.

“Under The Gun” has got the feel of Backyard Babies playing classic rock – but so much more. As well as being as excitable as a four-year-old on Christmas morning, it has a tremendous ear for a melody and gift for a groove.

The thing is, they’re only just getting started. The brilliant “The Great Escape” knows its way around Thin Lizzy’s latter period, but with its driving lead guitar it does things on its own terms (and we can pay this no higher compliment than to say it wouldn’t be out of place on a Black Star Riders album).

But the …urmm…touch of magic here is that they can’t be pinned down. “Midnite Sadusa” is a real dollop of sleaze and its hook line “I can’t get arrested, and I am holding a knife in my hand” is somewhere beyond catchy.  “Believe In Magick” has a bit of Bowie’s glam stomp and a massive chorus to boot, while “Polonium Blues” is slower, more methodical perhaps, and would most probably get called Stoner Rock if it emerged from the LA Desert rather than the Norwegian coast – but more importantly comes with a wonderful lead guitar break from HK Rein at the end.

As the thing rocks and rolls along, the great stuff just keeps on coming. “Siren Song” ushers itself in with a dirty, bluesy swagger and it really wouldn’t be going too far to call “Lost With All Hands” a hard rock masterclass. Even better, certainly for those that grew up with the Sunset Strip in our hearts, is “After The Fire” and its soaring harmonies.

A band that clearly knows its rock n roll history too, “Electrick Sorcery” merrily namechecks most of the bands Magick Touch pilfer from, from Kiss, to Sabbath, to Priest, they are all here and they should be too.

The title track finishes things. At almost six and a half minutes it is the longest thing here, perhaps the most epic in feel too. With echoes of that other wonderful Scandinavian rock bands more recent work,as it ends in an absolute maelstrom, it proves that the Final Countdown on rock n roll is far from beginning. Certainly as long as bands like Magick Touch are around to Rock The Night anyway.

Tortured Europe analogies aside, “Blades, Chains, Whips And Fire” is one of those albums that thinks that jut because you might not end in arenas playing your music, that is no reason not to dream.