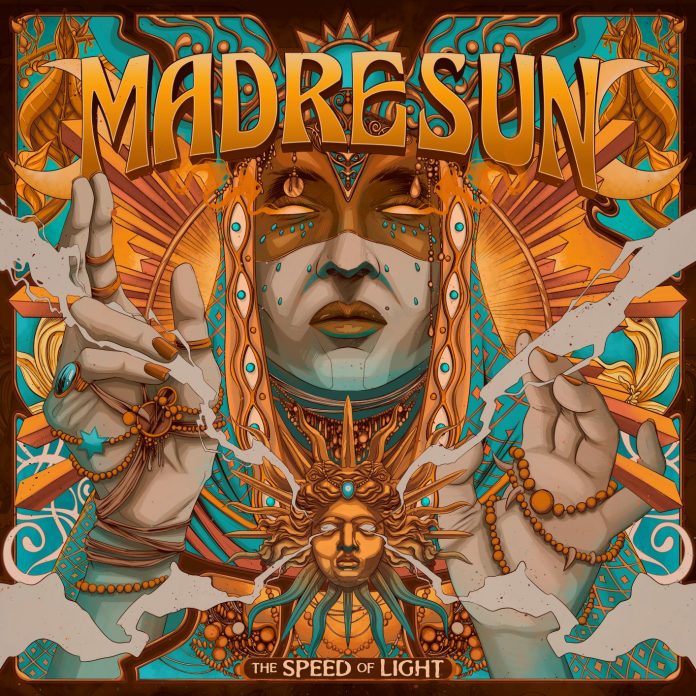 Sometimes, the obvious place to start is the only one to begin with. So – and as much as I hate doing this type of cliché – Madre Sun’s guitarist is Tyson Schenker. Yes, he’s the son of Michael.

Right, that’s that out of the way, because there is a lot more interesting stuff about Madre Sun than that, to be quite honest with you.

One listen to “Black River”, the opening track of this fivesome was enough to make that obvious. The youthful energy, the feeling that it could actually be anything it wants – from an AC/DC-esque stadium shaker to a sleazy rocker – the energy, the skill, the voice of Eduardo Cavina (one of the two brothers who completes the line up) and, yes the solo that Tyson rips out of his back pocket.

There’s more too. Like the opening line puts it: “I still remember, those old songs that used to sing to me.” This knows the past, it just wants to look to the future, so even though there’s a kind of U.F.O feel to the intro of “Trick Up The Sleeve”, it does its own thing. There’s flavours of 90s bands like Stone Temple Pilots here, as much as anything else.

The title track sees the other Cavina – Matt – pummel the bass to within an inch of its life, but there’s a hook here, something that suggests that they’d happily get down for a fight with anyone, and this harder edge than you’d expect is all over the groove laden “Our Way”, which has an in-built confidence that only comes when the band knows how good their sound is.

Pleasingly, there’s no attempt to throttle things back and no hint of a ballad here. Rather it ends with “Puzzle”, which is slower, but only so it can crush and add a fists in the air, sort of Saxon chorus. Basically, it sounds as full of youthful vigour as it should, and without a care in the world.

There are only five songs here that is true, but they are sufficient a) to get very excited indeed and b) to proclaim Madre Sun as the best new hard rock band on these shores. And ok, that might be a big call, but it’s one I am prepared to stick to.  Not that they need any back up. Rather, “The Speed Of Light” speaks for itself.

Prepare to be dazzled.