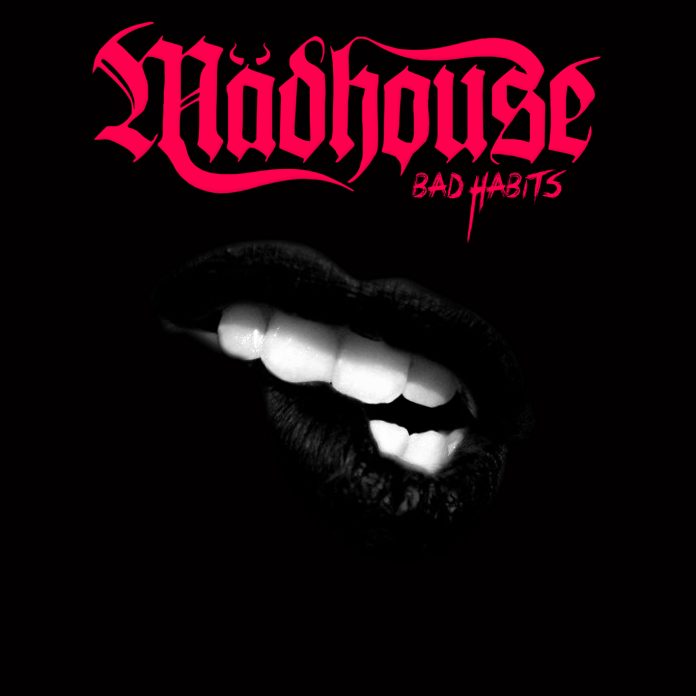 Its odd maybe, but the words “here we are now, entertain us” always come into my head when I review stuff like “Bad Habits” in 2021.

See, the received wisdom – from the po-faced podcasts or the clueless rock histories – is that the second Kurt Cobain sang those words, we all burnt our good time rock n roll (note, not Hair metal, I won’t have the term) records.

Its rubbish, of course. As I’ve written before, I was never that fussed about “Nevermind” because I was too busy listening to the GnR records that came out a week before on the same label. I was 16 the day after Nirvana’s second album came out, too, so I get it. The kids were down with it. Us, we were more bothered about the Skid Row gig we were going to on November 20th 1991.

I am going to assume, here, that Mädhouse (note the amulets) know all about the “Slave To The Grind” record, because there is so much of it running through this hour, you can’t help see it.

From the second “Bang Bang” kicks off, its like stepping back in time. To the days where sex was the Fallen Angel video from Poison, drugs was listening to Dr. Feelgood, and rock n roll came from the Cathouse or the Sunset Strip.

It seems that the band have been waiting for this album all their lives. Tommy Lovelace (I am going to assume that these aren’t real Austrian names) has the perfect voice for it too, and “Sick Of It All” and the likes are meaty slabs of testosterone.

“First Lick Then Stick” starts off like an 0898 number (if you know, you know – its like Only Fans for the 80s) and gets as filthy as something on “Trash”, and whatever “I Walk The Ponygirl” is about, it sounds like it’d make me blush (and that Messrs Stixx and Black on guitars listened to a lot of Mick Marrs), ditto “Itch To Scratch”, pretty much ditto anything on this actually.

“Atomic Love” is ludicrous and has hints of Def Leppard, “Rodeo” gets “sounds a bit like early WASP” bonus points, and credit too, to drummer Casey J Eiszenman who thunders his way through the entire thing (drenched in cowbell most of the time) but he helps the title track reach new highs.

Credit to them too, for not inflicting power ballads on us  – I can’t be the only one who reached for the forward wind button when listening to tapes 35  years ago? – and instead invoking the spirit of bands like Johnny Crash, who always looked like they’d fight you rather than miss you.

“Pure Oxycontin” slows things down a touch, but that’s cool, seeing as everything else is turbo-charged, but don’t worry, this isn’t Nelson.

“Fake It Till You Make It” sounds like Faster Pussycat, and “Metal Creed” sounds, pretty much, as exactly like you wanted it to at this point, “Say Nothing At All” couldn’t be any more 80s if it was wearing Spandex to work, and if a number of them fancy a boogie, then “Tourette Brunette” (no I am not making these titles up) is perhaps the best of them. The last one, “Love To Hate” starts off like it’s going to do balladry – it doesn’t.

And if we’ve been a bit tongue in cheek, then lets get it said: the playing on this is incredible and it sounds even better. These are the types of “Bad Habits” I was meant to leave behind, but the 16 years old that still lives on in me refuses to let it go. Whatever grunge was meant to make me think. The sound of sleaze is very much alive and well.