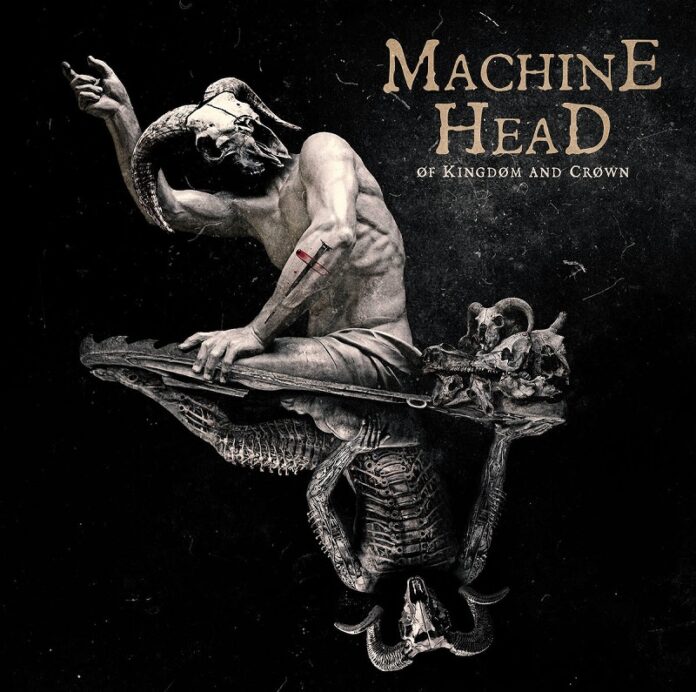 “Good” guys. “Bad” guys. Who defines that? Aren’t we all both of those things? Does good and evil exist? Existential questions that I didn’t think I’d work into a heavy metal review, but here we are.

One of the greatest TV shows ever made was The Sopranos. The lead character in that was not a “loveable rogue”, he was a cruel, manipulative, murdering, violent adulterer, yet didn’t we have some sympathy for him before the end?

Enter Robb Flynn, I suppose: “The album and concept was loosely inspired by the Japanese anime series Attack On Titan,” says the leader of Machine Head for 28 years, “in the sense that in that series, there is no “good” or “bad” guy… both sides believe they’re doing the right thing, but both are committing atrocities and evil.”

So yeah, we are in concept album territory here, ladies and gents (loosely anyway). It passes the MV test for concept records mind you. A simple mantra of, yeah sound mate, are your songs any good?

And here’s the thing. I have a strange relationship with Machine Head. And its this: I want to love them. But I have spells when I lose touch with them. I was 19 when “Burn My Eyes” came out. We all lost our minds. Fast forward to 2018 and they released “Catharsis”. An album for which the word “patchy” was invented, let’s be honest.

Re-reading my review of that one though, I was struck by another quote of Robb Flynn’s. “Nine albums deep, it would be really easy for us to coast and write some middle of the road shit that won’t offend anybody.” Credit to them, for that at least. Credit to them for not doing the “safe”, the “bland”. The boring. But nonetheless, it doesn’t always hit the mark perhaps I put on “ØF KINGDØM AND CRØWN’ [note the capitals and the weird shit on the “O’s” not my choice, but instructional] more in hope than expectation.

So yeah. Let’s get this said, shall we? The reason I’ve not reviewed it for the fortnight I’ve had it? Because I didn’t know how to do the thing justice. This is their best album in almost 30 years.

The opening “SLAUGHTER THE MARTYR” is a statement of pure intent. 10 and a half minutes of laser guided hate, the way it builds, the way it explodes. The way it gives you the hook of “I lay paralysed in homicidal rage!” as if it commands you to feel the same. It is a truly astounding piece of music.

That would have been enough, it really would. That’s only the start. Metal hasn’t sounded this vicious for decades. Thrash is dangerous again. “CHØKE ØN THE ASHES ØF YØUR HATE” does the old school thing, it takes you back to the halcyon days, but interestingly it never sounds dated. It sounds like it wants to beat you.

“BECØME THE FIRESTØRM” is ferociously heavy. And you can only imagine that new boys  Wacław “Vogg” Kiełtyka and drummer Matt Alston have breathed fresh life into the whole band. Certainly the former, with his background in death metallers Decapitated has given us something that is beyond thrash.

There are some truly astonishing songs here. “MY HANDS ARE EMPTY” has a grandiosity that belongs almost on the title sequence for Game Of Thrones. It is an immersive, cinematic experience almost, before it rumbles into view, before there’s a sort of Metallica-esque crunch to the tones of “UNHALLØWED”.

It is only after that one that MV realised that the strength of that one was the hooks, the fact for all the maelstrom, this all belonged as being screamed out in an arena. That’s where “KILL THY ENEMIES” is ending up. It’s just a fact. It’s like being hit by a concrete block, but it’s such that you just want to do it again and again. It all just sounds so menacing, “NØ GØDS, NØ MASTERS” lurks, almost, waiting for its opportunity. A thought that the screeching “BLØØDSHØT” would have too – if it wasn’t too busy giving thrash metal mouth to mouth and reviving the genre.

Anger has always best categorised Flynn’s delivery. He’s perhaps never sounded as righteously indignant as this, mind you. Not on the way he sounds on “RØTTEN”. After “TERMINUS” (the last of the trio of interludes) gives way to “ARRØWS IN WØRDS FRØM THE SKY” there’s a feeling that not just this album, but this band, have come full circle. It’s not that this sounds like “….Eyes”, but rather it could have only been the band that made it.

So is there good and evil? Yes. There is. But its in the beholder to draw the line, after all. The same as with “good” music. There’s going to be someone that loves “Supercharger” and doesn’t rate this. Who are we to judge?

However, “ØF KINGDØM AND CRØWN’ is surely more than just a “great Machine Head record”. It’s a great heavy metal record. I’d argue that its the best for a long time and probably the best metal that 2022 will give you.