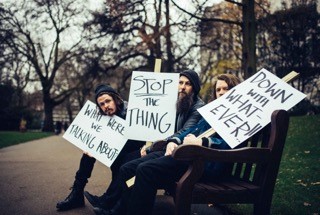 You know those annoying pieces in magazines where desperate musicians try their best to look cool by pretending the first album they bought was achingly hip? Like “oh yeah, I was six when I first heard ‘Reign in Blood’ and I knew Slayer were my jam of choice at infant school.” Well, I’m here to tell you its bollocks.

To that end when I was 16 I had saved up enough of my pocket money to buy one album. I’d narrowed it down to two choices. “Nevermind” by Nirvana which all the kids at school were going mad for, or Def Leppard’s “Adrenalize”. Which one did I buy? Well let’s just say a rock wasn’t out of the question on the bus home.

That story might just highlight my terrible taste, but it was actually a lead in to saying I wasn’t and am still not a huge fan of what we have to call “grunge.”

So it was that when I saw LTNT last autumn, I wasn’t expecting to love them (all the press made reference to their 90s revival sound – and it is right there)  but there they were sandwiched in the middle of a three band bill with Sons Of Texas and Seether and, there they were wearing dresses (it was to do with chafing, they helpfully explained to me on Twitter later on), and they ruled. Pissing off a homophobe in the crowd along the way was merely a bonus – but a welcome one.

A few months later along comes “Yode” – four tracks of filth and fury and co-produced by Seether’s Shaun Morgan (“Since Shaun and I met we’ve been on a lot of dates. Pottery classes, salsa lessons, things like that……He is like a brother except he doesn’t beat me up or make me eat dog shit” suggests LTNT’s Liam Lever) and the four tracks are as diverse as you might hope from a band that happy enough to support Brant Bjork and Chevelle. They wouldn’t have fitted in, either – the trio aren’t about to fit in anywhere – but they would have been ace.

“Fuck Bunny” kicks things off by being ferociously heavy, but chuggingly fuzzy, with all the light and shade of a Fu Manchu and a chorus that is sloganeering at its best.

“Whitey” is even better. A crunchy riff that you half expect to hear turn into “I Love Rock N Roll” at a moment’s notice, so put another dime in the jukebox, baby, and lose your preconceptions. “Happy Days” boasts a proper metal riff, no fooling around. What is more apt, though, is that the lyrics take you into Lever’s private hell.

Probably the best, though, is saved for last. The third producer on this is Matt Hyde  (a man who has achieved god like status on MV for being the knob twiddler on Monster Magnet’s “Powertrip” masterpiece) brings all that to the fore on “Call It What You Like”, which is one of the finest scuzzy little gems since that first Zico Chain EP.

So you can call it what you like, I’ll just say that this is a brilliant EP from one of the most innovative and truly trailblazing bands around right now.