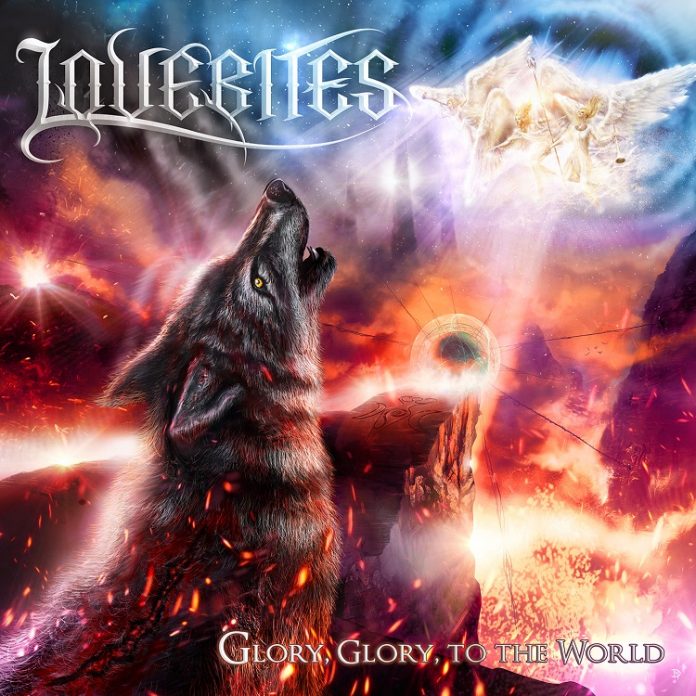 “Glory, Glory To The World” is one of those records that almost doesn’t need reviewing. The first minute is all you need.

The point is that you either like this music or you don’t, and no one making it gives a shit either way, because they love it more than you.

What is interesting about “…..World’s” five tracks is that Lovebites were always metal. I stick by the fact that their 2018 record was a genius slice of exactly that (and can’t for the life of me work out why I didn’t review their 2020 one), but on this EP they’ve dispensed with any idea of holding back.

Pretty much any of these works on the principal of “bollocks to less is more, lets layer the thing sky high”, and in the case of “No Time To Hesitate” I would argue that they’ve never been better, never. The thing soars. So much so, that touring partners Dragonforce might balk at the scope. And good grief its heavy too.

“Paranoia” adds even more depth, obviously thinking the last two were weedy, Miyako does some keyboard things that add a scope, and Asami (who seemed shy on stage when I saw the band) roars some vocals. The twin guitar has a proper Maiden thing, while “Dystopia Symphony” manages to live up to its title for grandiosity -as well as nicking the piano from “Holding Out For A Hero” in the process, seemingly.

And if along the way, they’ve all sounded like they should have been on a film soundtrack, then fittingly, the bonus track “Wings Of Transylvania” actually was. It basically does the same thing as the others too. Just faster.

“Glory, Glory To The World” is mighty in every sense. The fact it’s the metal that every non-metal fan thinks metal sounds like is to its credit, the fact that it’ll probably divide even more so. What it is, though is the sound of a brilliant band doing exactly what they want to.