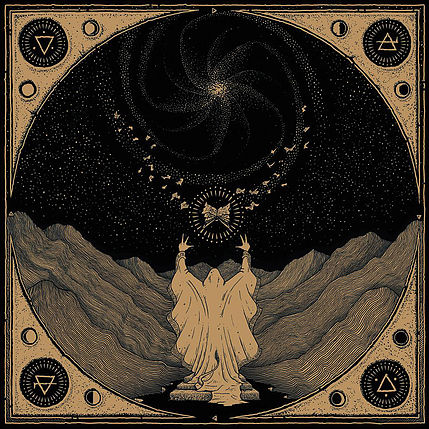 Lotus Thief are comprised of two members of the much lauded band Botanist. Drummer Otrebor and multi-instrumentalist Bezaelith formed the band with the purpose of “lauding knowledge and illuminating ancient words and art through song”. Many observers will correctly state that that purpose was achieved to a large extent on their debut release 2014’s Rervm.

Five tracks make up the new album and the pattern that was set on the debut is continued and expanded on with more literary texts from which to source their inspiration. While Rervm drew influence from the Roman poet Lucretius this new release goes back even further into the ancient Egyptian’s up to the renowned occultist Alister Crowley.

Album opener “The Book of the Dead” is based on the ancient Egyptian funerary text from around 1550 BCE – 50 BCE. The texts consists of a number of magic spells to assist a dead person’s journey to the afterlife.  Musically it’s a perfect match between lyrical theme and melody.  The track goes from quiet reflective and melancholic passages, as does the album itself,  through to occult-like rock riffs that evoke the varying twists and turns that one might undertake when flitting from one life to another.

“Circe”, by contrast, is a more sweeping and elegant piece of music that is led by an enchanting rhythm that unsettles as well as soothes throughtout the near 9 minute musical odyessy.

“The Book of Lies” brings to life the work of controversial occultist and author Aleister Crowley. Published in 1912 it is seen as one of his most suggestive works. Given it had 93 chapters then you would find it difficult to condense it into 9 minutes of music, that said it was only one page per chapter, but still it’s a tough ask. Lotus Thief know what they are doing though and have yet to outreach themselves. It provides more dynamic moments than the first two tracks but still contains itself within the structure of lengthy dramatic but emotive passages of ethereal riffing.

The final two tracks are musically in the same sphere as the first three but there is a change in tempo and mood as “Salem” is a more mournful and sombre piece occasionally broken up with brief isolated bursts of energy. “”Idisi” provides a fitting finale to a brilliantly challenging and complex album.

Gramarye is out on September 16th via anywhere that sells good music.

Find the band at: