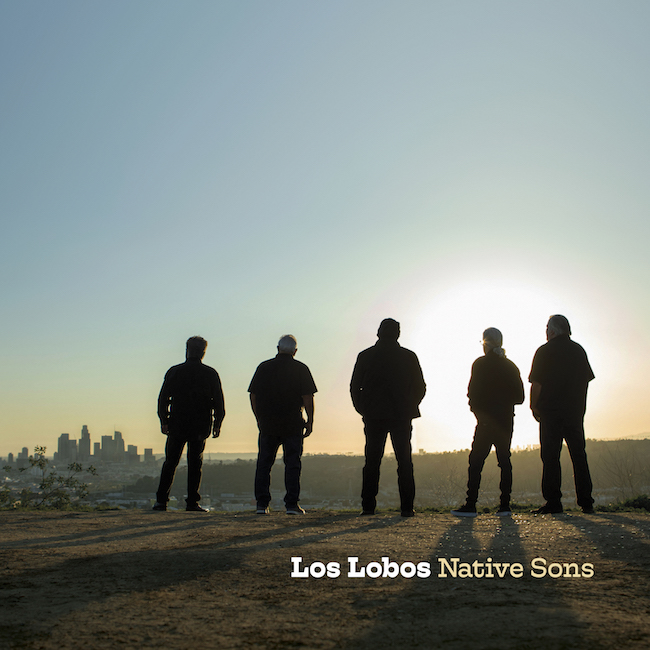 While i`m not the biggest fan of bands releasing albums of cover songs, I must say that I do enjoy it when most of the number`s covered are unknown to me. Los Lobos, i`m sure need no introduction but are an American rock band from East Los Angeles, California. Their music is influenced by rock and roll, Tex-Mex, country, zydeco, folk, R&B, blues, brown-eyed soul, and traditional music such as cumbia, boleros and norteños. They have a thirteen song love letter to Los Angeles with the recently released album ‘Native Sons’ which has a varied selection of tribute songs from their homeland, ultimately creating a crucial snapshot of L.A.’s musical heritage.

The album opens with an updated version of `Love Special Delivery` a number by The Midniters in 1966. A sort of what could well be a Northern Soul classic. The Midniters were an American rock group, among the first Chicano rock bands to have a major hit in the United States. We remain in the sixties for the next number `Misery` made popular by Barrett Strong, one of the first artists to record a hit for Motown. This number written by Don Juan Mancha retains its soulful vibe but is given that los Lobos twist and has a superb guitar solo midway through.

The guys cover Los Angeles formed Buffalo Springfield`s medley of `Bluebird / For What It’s Worth` and there`s almost no join as the former bleeds into the latter protest song. This version retains the psychedelic tinges of the original numbers with some delightful quite hallucinogenic guitar chords. We have an updated version of `Los Chucos Suaves` a song from the 1940/50 `s by Lalo Guerrero Y Sus Cinco Lobos. Lalo Guerrero was recognised as the “Father of Chicano Music”. A number that you`ll find hard not to get up and dance around to.

The pace slows down with a version of `Jamaica Say You Will` a song written by Jackson Browne who grew up in the Highland Park district of Los Angeles. A pretty faithful cover that maintains the exquisite love song texture of the original. The jazzy R&B `Never No More` written by Percy Mayfield, a rhythm-and-blues singer who spent the later years of his life in Los Angeles gets a breath of fresh air. A blustery and bouncy foot stomper of a track.

`Native Son` from which the album takes its title is the only original song on this release, a loving homage to Los Angeles that to me had that soulful texture that I associate with Van Morrison. There`s a quite blistering version of `Farmer John` which was placed in the charts in 1964 by The Premiers who came from San Gabriel, California.

We have a faithful take on `Dichoso` which translates as Happy, a number from the late sixties recorded by William Correa or Willie Bobo as he is better known, who moved to LA in the early seventies. The band keep the enchanting hand percussion and that mesmerising Latin feel of the original piece. Hawthorne, California`s most famous sons The Beach Boys get an uplift with a revamp of their song `Sail On, Sailor` not an obvious choice to me but it does work, and the vocals are pretty close to Blondie Chapman`s who led on the original.

We remain in the seventies with a cover of Long Beach`s WAR`s `The World Is A Ghetto`. There`s no edit here as the track runs at over eight minutes long including a stunning electric guitar solo.
L.A. roots-rock band The Blaster`s `Flat Top Joint` gets a makeover which is an interesting choice as they helped pave the way for Los Lobos to get signed and counted Steve Berlin as a member prior to his joining Los Lobos. The song preserves the sort of rockabilly / roots rock texture of the original but seems a bit more polished.

The album closes out with `Where Lovers Go` which was released by The Jaguars, one of the very first racially integrated vocal groups of the ’50s who came together on the campus of L.A.’s Fremont High. A captivating and dreamy doo wop instrumental and a quite hypnotic way to see us out.

`Native Son` works well as the band have not gone for obvious choices to cover but have taken some lesser known tracks and put their own stamp on them. I`d never heard of The Midniters, Barrett Strong, Willie Bobo, Percy Mayfield, The Jaguars, or the wonderful Lalo Guerrero and will certainly be checking out what else these trailblazers have to offer. It`s been nearly six years since Los Lobos released a studio album and with original track `Native Son` on this release it has whetted my appetite for more. As the worldwide pandemic has hopefully started to ease off maybe the guys will oblige us, por favor.