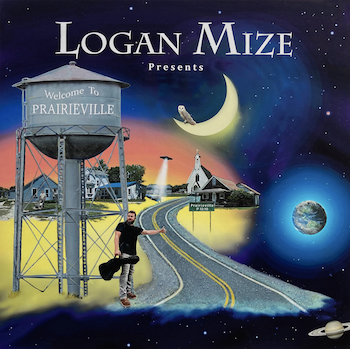 Concept albums, I admit it, I usually go “meh” and only care about one thing: are the songs any good?

Well “Welcome To Prairieville” is one of them, and of course, seeing as its Logan Mize then good songs are a given, but there’s something else too.

Look I know its easy to say this, late at night in the middle of England and not the middle of America as the rain teems down on an autumn night, but here goes: aren’t all these albums a kind of concept record in a way?

What I mean is, the particular brand of music that Logan Mize and the rest (pick one, there’s millions) create is one that is a stylised version of the US, of the dirt roads, the Apple Pie cooling on the window sill, the hard nights, hard work, hard praying world.

It resonates all across the world – hell, look how many country records I review – but its not real, it’s a concept, surely?

“Prairieville”, the place where – as the opening line of the song goes – “that sign ain’t right on the edge of town, the population keeps going down” is a place that Mize and his writing partner Blake Chaffin made up to represent what Counting Crows might call “somewhere out of middle America” and the pair have constructed another damn fine album out of these characters.

The opening song “George Strait Songs” is a brilliant marker. Mize sings that he “spends most of my life on the county roads” and its tempting to think of the pair cast as troubadours, observing everything with their notebooks.

Incredibly catchy, its worth remembering that this is Mize’s second record of 2021. “Still That Kid” was a cracker too, but this is better.

And its better because of its depth. The stories, the almost claustrophobic pop of “River Road” which builds like its 1985 and there’s a school disco, that’s one thing, but it’s the every man status of the rock n roll too. Like, I’d probably explode into flames at the sight of holy water and I don’t drink, yet I still get “Wine At The Church, Beer At The Bar” and its organ driven sound. So would anyone.

It pretty much goes like that for all of them, actually, and for a man who is so steeped in the past of this sound, its interesting how modern this sounds, “Follow Your Heart”, is an assault on the mainstream and proudly so,  and he is proud too, seemingly to write the songs he sings (LM co-writes 10 of these 11 tracks.

It’s no slight on him either, that the one he doesn’t “I Need Mike” is perhaps the best one. A story of a young man for whom it all got a little too much, is one that is sure to hit home. And the solo is a cracker. Such class is all over it. “If You Get Lucky” had hit single written all over it – and it was – while the ballad “Tell The Truth” (think of Goo Goo Dolls) is a beauty.

“We Ain’t Broke” (halfway between Georgia Satellites and Eric Church) brings the rock n roll, and if there’s something uniquely American about the whole thing then “I Still Miss You” absolutely underlines it.

The big ambitions of the artist are shown best, though, by the widescreen “It’s About Time” – and it really is time for Logan Mize. That said, he knows where his heart is. He says it himself:

“Maybe it’s the water that

Just gets in your blood

And some of the dust gets in your soul

I don’t understand it and I never will