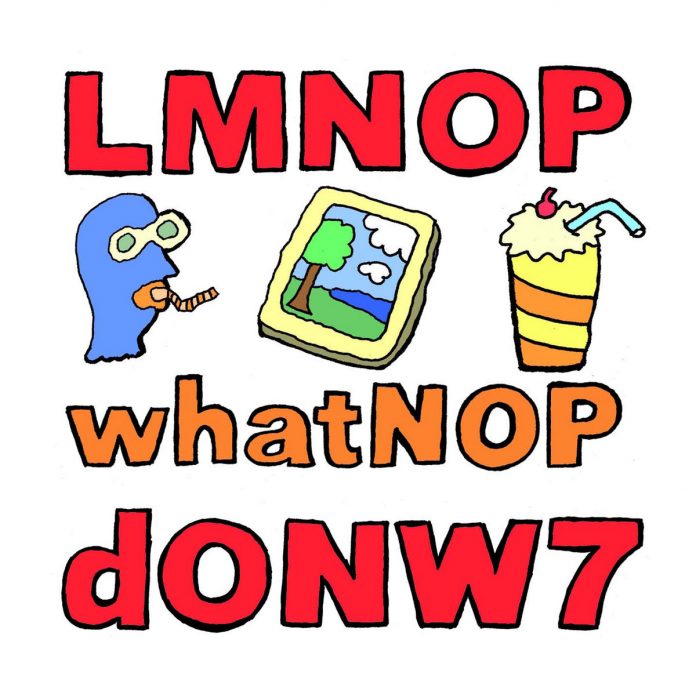 LMNOP is the musical brainchild of Stephen Fievet, the originator of the comic strip Babysue and a long time creator of lo-fi, eccentric pop music. His new album `whatNOP` is released this month and contains songs about goats, RMA’s, milkshakes, benches and more. It was composed, performed, produced, mixed, and engineered by the songwriter himself. He has related that “The album is a test to see how much mileage can be gotten out of a $15 guitar amp found at a yard sale”.

This release opens with `Things` a quite full on catchy earworm of a number with some fuzzy guitar riffs. A song that`ll have you singing “on her way out, on her way in” for the rest of the day. There`s an equally captivating number with `Wind Up Happening` which has some delightful chorus harmonies and a very brief guitar solo mid-way through.

`Know` is a more laid back anthemic kind of track that seems to question everything and come up with the answer that we really just don`t know. We have some tinkling piano keys and guitar riffs that break the song up. A number for upheld lighters and phone flashlights in a live setting. I felt that `Living Tide` seemed to relate to taking the safe option in life but wanting to make that risky change and live dangerously. Another composition that`ll have you tapping your foot to.

`Anything And Everywhere` seemed to talk about RMA`s which could possibly be an acronym that stands for return merchandise authorization. The first part of the process of returning a product to a business to receive a refund, replacement, or repair. Regardless, it`s another breezy enjoyable piece that has some enchanting vocals, a driving drumbeat and brief guitar solo. I have to admit I sort of gave up trying to understand what the hell `Nuclear Trust` was about. It`s another snappy track with things like canned saluter and cheese grater getting namechecked along the way.

`Flicker Goat` mentions bats, rats, and cats and seems to have some references to financial shenanigans on route, a tuneful submission that I just drifted off to. We had a more stop start feel to `Blurry` with further curious lyrical content and some enjoyable buzzsaw guitar riffs.

`Venus Blind` is a sort of Ramones style ode that could be viewed a little ambiguously as it alludes to breaking up with Venus, either the Roman Goddess of Love or possibly the planet named after her. There`s pounding piano keys along the curious and enquiring expedition which is `Color Slide`. Bizarrely beautiful.

`Make That Plane` is a sort of heads down no nonsense mindless boogie with chugging guitar a la Chuck Berry. A tale alluding to a dash for a plane? It`s up to you to decide. We have a love song of sorts with `Melted Chain` where the lyrics were rapidly shared and almost wonderfully shoehorned in to fit the number.

`Best Mistake` is a sort of throwaway song with a cracking guitar solo and the sort of ditty that wouldn`t seem out of place in a scene from a teen comedy such as American Pie. A constant drumbeat with a strummed acoustic guitar and to a lesser extent blurry guitar riffs lead us through the wistful and dreamy `Diver`s Head`.

`Benches` was another driving captivating composition with slightly distorted guitars chords which raced along but did stop abruptly and restart twice when you least expected in its four minute life span. The album closes out with `Milkshake` which is a short ballad like waltz with endearing piano keys.

`whatNOP` is a pure delight. A release that`s difficult to describe other than we are offered sixteen shortish captivating pop soundbites with lyrics that on the whole were beyond my comprehension, but I have to say I didn`t think that mattered. LMNOP (aka dONW7) or Stephen Fievet is wonderfully unique and almost defies categorisation. To me if you like bands like Buffalo Tom and The Lemonheads and the quirky wit and wisdom of Johnathan Richman, you`ll love this.