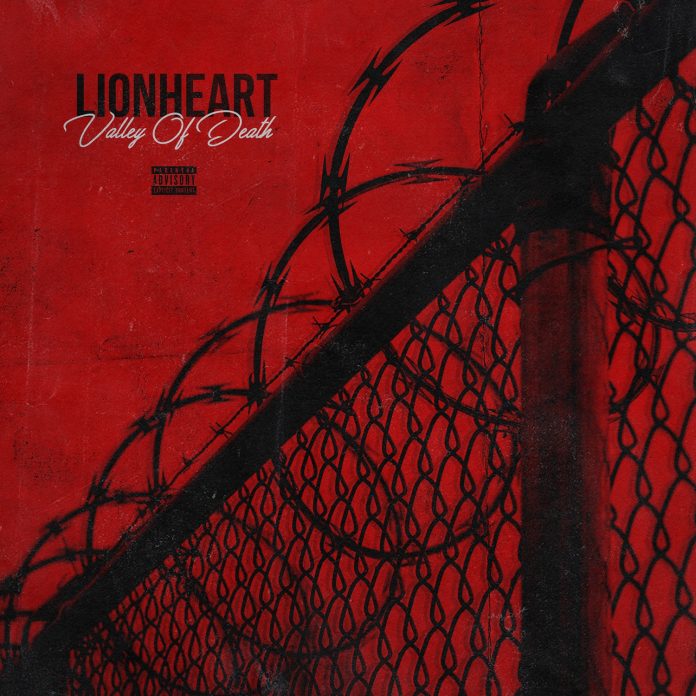 “If I said it, then I meant it” seethes Rob Watson on “For The Record”.

And for 12 years he’s lived those words. There are some bands that you listen to, they might be good, some might be not so, but either way, you know they don’t really believe what they are singing. It might be fun, escapism, whatever, but it is a story.

With Lionheart it isn’t fun. Good Lord, its violent, it’s brutal, it’s even scary, but one thing you cannot question is the honesty.

On the same song – and that’s the right word too, because for all the violence here, this is a laser guided and classy escapade. One which you know would sound amazing in a moshpit, too – he gives the other key to this. “Once again, for the record, I still don’t give a fuck about selling records…..” and if you think of it, like that, it makes sense. Lionheart are being true to themselves (and people latch on, the last one got to number one on iTunes metal charts).

It starts with the title track. Spoken word doesn’t cut it. Rather it is Watson in almost “fire and brimstone mode”. Laying down what a politician might call his red lines.

Once the second song kicks in “Burn” does so with a riff that recalls – to me anyway – Stone Sour, but only if they were jamming with Madball. The hook here: “every bridge I built I just burn it to the ground” would a) look great on a t-shirt, and b) explains the self-destruction here.

Stick To Your Guns Jesse Barnett plays a stunning cameo on “Rock Bottom” a harrowing lament on depression. “I am face to face with my demons and they want me destroyed” is one of the lines here” and “When I Get Out” isn’t even casual about it’s violence. Reeking all hell on a snitch, and never have the words “I’ll see you when I get out” seemed more menacing. How true this is I don’t know, but remember those word at the start? If I said it then I meant it, right?

Actually, for all the lyrical content – and I love words, always have – “….Death” works if you just want to bang your head and lose your shit, too. “Born Feet First” has a groove that is beyond big. “Stories From The Gutter” has a drum beat that would shame any thrash band as Jay Scott excels.

The thought that this – rather like Madball who I mentioned earlier – has a crossover appeal, is clear throughout, but explicit on “Before I Wake” which has Mr. Jet Black rapping on it, and the clenched fist fury, stoicism, call it what you will, that is on the album is underlined on “In My Skin”. “Put the gun in my mouth, pull the trigger, spit the bullet back out….” Needs no further discussion, really.

The very end of “Dragging Heaven” is further proof that Lionheart aren’t your average hardcore band. It is – I interpret anyway – a love song, of sorts. It is the work of a band that is nowhere near done anyway – and it ends with a snippet of Tom Petty’s “Freefallin’ – which is just another in the great long list of things I never expected from it.

I have listened to “Valley Of Death” a hell of a lot over the last couple of weeks, and – I have to say this – it keeps coming into my head that this is exactly the sort of music that Machine Head should be making, but don’t. A stunning collection, this isn’t so much an album as 24 minutes 40 seconds of brutal catharsis.