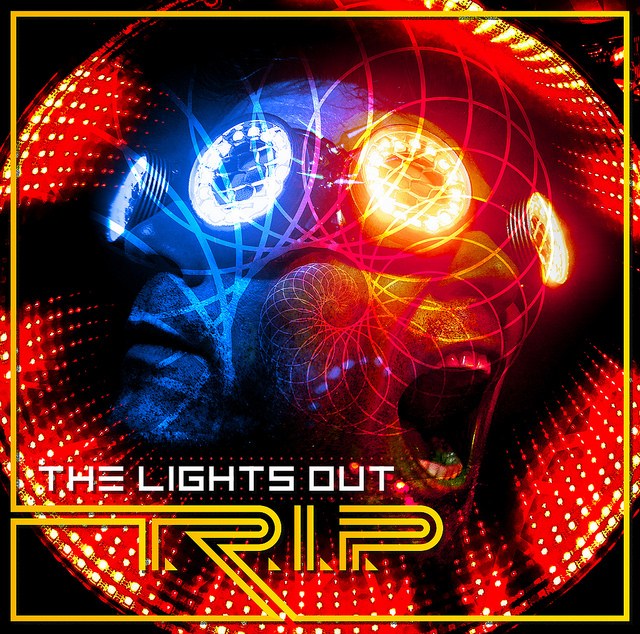 Are you ready for the reckoning?

The Lights Out reckon they are “music and light project”. Moreover, they describe the album in their own words thus: “The idea behind the project is that our observable universe is one of many – a multiverse – where everything possible exists somewhere. There is a reflection of you living an alternate life in a parallel world, right now. In some of them, you’re a delusional performer, a double agent, a power-tripping mall cop or a pickup artist. In all of them, you’ll encounter beings existing outside of time, like incarnations of death and higher forms of intelligence.”

No, us neither. What we can deduce from this is two-fold. First they are better with words than us and second, TLO are a band that evidently likes to do things differently. To that end the Boston quartet have become the first band in the history of the planet to release an album on beer can. They suggest you listen to “T.R.I.P” while drinking it. MV is teetotal (sorry, Lemmy) so we’ll take their word for it, but we do know a great album when we hear it.

And make no mistake. This is one of those.

Often its best to strip all the extraneous stuff away and go back to the Beavis and Butthead world where records were either “cool” or they “sucked” (that’s why these two ere the greatest reviewers in the history of the world) and using that scale, this is very, very much in the former camp.

Actually, it’s a pretty straightforward sci-fi tinged rock record. Ten songs of absolute class and originality, and thankfully eschewing the path that some might have taken it down and had it become the most unlistenable muso guff.

Opening with the glorious harmonies of and gleeful rock n roll of the title track is all very well, but it’s the stone cold classic “Last American Virgin” that convinces that this is anything but run of the mill. Sleazy guitar and a magnificent chorus, combine with a proper crunch to make something pretty spectacular.

But it’s the diversity here that is wonderful. Although they work within the same framework, no two songs are the same. “Waves Of Sound” exists on its on widescreen, psychedelic terms,  but then this is juxtaposed at the next moment with “Layin’ Down The Law” with its stomping, floor filling intent and the outright ambition of the stunning “I Dream Of You Again” which builds into quite the power ballad.

One of those records where surprises aren’t so much surprises at all, so varied are its twists and turns, “Lies” for example hustles and bustles in a Ben Folds Five type of way, but on the other hand “The Undertaker” is a classic rock beast with a Free-esque bluesy swing and lets be honest if you can’t work out what type of headspace “The Cosmic Gardener” occupies then The Lights Out may as well forget you anyway.

Seemingly overflowing with ideas and stories, “Cruel Enough” adds a soul element,  and the closing “Making A Better Girl” cheerfully includes the poetic thought that: “some of us are looking for redemption in the great Dionysian adventure that is the low road we call rock n roll” and in so doing probably becomes the only song in history to include a discussion on the sensual, spontaneous, and emotional aspects of human nature in its lyrics. See what we mean about originality?

Of course, originality is all very well – laudable even – but its nothing if you haven’t got the songs. The Lights Out get this too. “T.R.I.P” packs all of these thrills and spills into just over 40 minutes and is truly fantastic on just about every level.