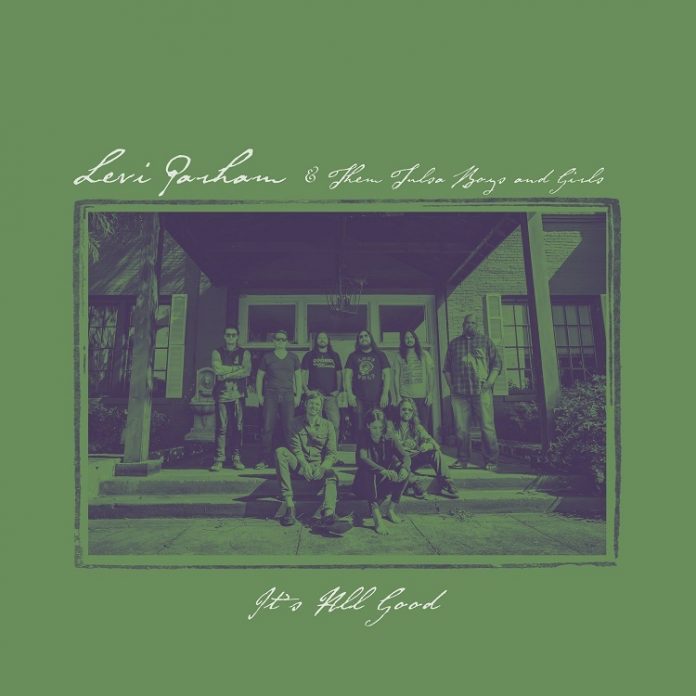 I’ve written before about the romanticised view that MV has for bands from the south of America. It’s place names have connotations that ours just do not. I live in Solihull, West Midlands – not that bad a place to be fair (and Sabbath’s Geezer Butler lives in the town) but I can’t compete with Tulsa, Oklahoma, and even if I could I sure as hell can’t hold a candle to Muscle Shoals, Alabama.

Muscle Shoals, the place where some of the finest musical magic ever to be dreamt up comes from provides the backdrop for this, as Levi Parham got a gang of the finest musicians in Tulsa and shuffled them all off to the iconic Cypress Moon Studio.

Just look at them all on the cover here. Again, maybe this is the product of watching too many episodes of Dukes Of Hazard as a kid (still haven’t seen the film) but there’s something about the timelessness, the laid back nature of the area that resonates.

And it’s all of those things; the wonderful musicianship, the strange alchemy of Muscle Shoals and the fact that the music could have come from any era you like – and don’t worry it still sounds cutting edge – that make “It’s All Good” what it is.

It’s interesting that when uploaded to my computer to listen to this, the MP3’s came up with the words “unknown genre” because if ever a record subscribed to the thought that there are only two sorts of music: good and bad, then it’s this one.

Which is why, if you take the record as a ten-song journey, it begins with the primal blues of “Badass Bob” – the tale of an outlaw who “makes friends just to cheat ‘em and rob ‘em”, but ends with the simple – and simply gorgeous – “All The Ways I Feel For You”. The lion (Parham makes a roaring noise just in case you weren’t sure) has been tamed and is now a “house cat”. More content than the average purring pussy too, there is an air of happiness here that you can’t fake.

The path to get between the two is many and varied, though. “Borderline” is a strident, brooding blue-collar rocker, “there’s a place called California” he sings, “it’ll take your life and let you live”. The bright lights might offer false gold, but there is plenty lurking on the dirt roads too. Not least “Don’t Turn Your Love Around” – absolute blues in its intent, but with some piercing, real rock guitar.

The twists and turns take in “My Finest Hour”, which is mellow and laid back, but turns into a real formidable jam over the course of its near eight minutes. The rest of it is simpler, “Boxmeer Blues” – a heart on the sleeve tale of life on the road: “the only thing missing in Italy was my baby wasn’t there to keep me in line” – is the sort of thing that Will Hoge has made a career out of, while proof that nothing sounds as mournful as Lap Steel is one facet of “Shade Me” but another is Parham’s claim to be influenced by Oasis.

“Heavyweight” is simplicity itself, a fun little thing, but one that is as catchy as all hell, while “Kiss Me In The Morning” – with its horn section is not too dissimilar to something JJ Grey might do at his best, while a there’s a trip to the honky-tonk for the title track, and if its central message is that things ain’t as bad as they seem, it fits the happy, joyful vibe throughout the album perfectly.

Ultimately, “It’s All Good” is an album that proves Levi Parham and Them Tulsa Boys And Girls are liars. It’s a record that sets its own rules and then plays by them. “It’s All Good” no, absolutely not. It’s all brilliant.