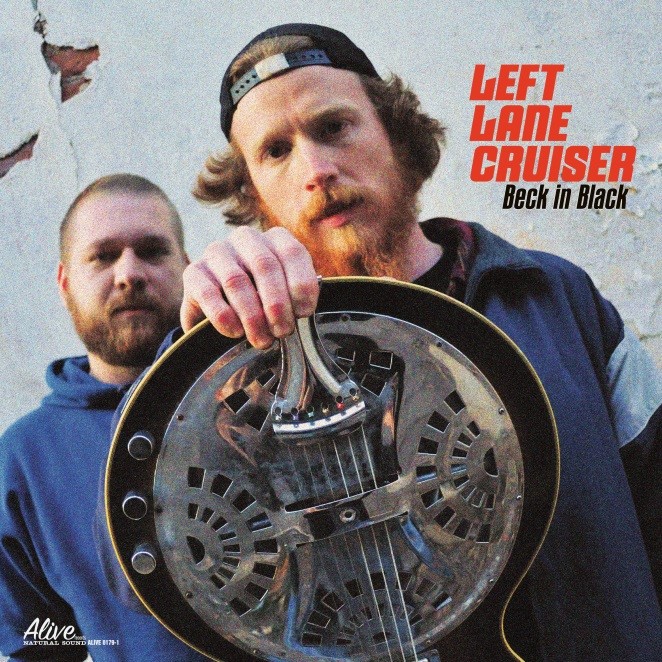 Left Lane Cruiser got plenty of attention last year with the release of their excellent ‘Dirty Spliff Blues’ album and if you liked that, then you won’t be disappointed with this.

‘Beck In Black’ is a collection of songs from LLC’s first albums on the Alive label, hand-picked by original drummer Brenn ‘Sausage Paw’ Beck. All were remastered and the album was originally put out on vinyl as part of Record Store Day. It’s now available on CD and Digital with the addition of 6 previously unreleased songs.

MVM loved ‘Dirty Spliff Blues’ – it was a raucous and raw sounding blues album that really rocked. ‘Beck In Black’ is actually not a repeat of that but is just as good in its own way.

It opens with a cover of Hoyt Axton’s ‘The Pusher Man’. This track is terrific with its lovely slide work and world weary vocals. ‘Circus’ is the first of the remastered tracks and it’s outstanding. This one rocks with its dirty sounding slide guitar riff and thumping drums. ‘G Bob’ is next which is also remastered. This is a bit mellow with its country style picking on acoustic guitar but it offers some light to their normal shade. Track 4 is ‘Bloodhound’, the 1st of the unreleased songs. The first question I would have to ask is why it was left off another album, as its great. ‘Zombie Blocked’ is another old song and is typical LLC. A cover of the much covered ‘Chevrolet’ is next and it’s a pretty straight reproduction of the track. ‘Sausage Paw’ is next and another new song. This is probably my favourite song here with it’s mean and funky guitar riff.’Crackalacka’, ‘Hip Hop’  and ‘Heavy’ are next, all of which are remastered songs, each of which gets progressively better than the one before. ‘Heavy’ is just that and is a great example of Left Lane Cruiser’s sound and identity. New song ‘Maybe’ is next and this is a real country blues with some great keyboard to beef up the sound. ‘Amy’s in The Kitchen’ (remastered, dirty and funky) is followed by  ‘Chicken’ (new, dirty and funky) before a new instrumental song closes the album – the press release has this as ‘Juice To Get Loose’ but it downloaded as ‘Shine’. Either way it’s good.

As a taster for the band ‘Beck In Black’ is a great place to start and the older songs have certainly motivated me to check out their earlier albums. However it’s a strong album in its own right with plenty of classic Left Lane Cruiser to enjoy, with a few songs offering a more mellow side to the band. I’m hoping we get to see these guys back in the UK playing live but enjoy this in the meantime.

PS – If you like Left Lane Cruiser, then check out 20 Watt Tombstone. Also hailing from Wisconsin, they regularly play on the same bill as LLC and in my ideal world, we’ll see them touring the UK together soon.