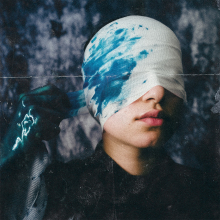 Léa Sen is a London-based singer, songwriter, and producer whose debut EP `You Of Now Pt. 1` is released this month. Léa Sen`s vocals have featured on work by Peter O’Grady, better known as Joy Orbison an electronic musician whose style is a coalescence of house, dubstep, UK funky, UK garage and old school jungle.

Speaking about her EP, Léa Sen says: “I felt like I was writing too much about the past or the present (which is already the past) and I got stuck in memories and vanished promises, so I needed to write something about tomorrows. It’s really just a conversation with my future self. “Do you finally get this right? Do you eventually let this go? I know you still feel that way, it’s cool. I don’t expect perfection from you.”

This extended play opens with the quite ethereal `Much To Lose` which I read is about a relationship that has run aground and convincing yourself that what you lost wasn’t that important because it was toxic. It’s about loss and acceptance, a kind of grieving of sorts. It has a quite mesmerising intricate guitar chord riff that allows the singer a platform to really shine. I thought the vocal delivery reminded me of the wonderful Julianne Regan from All About Eve. We have a further gentle musing with `I Like Dis` with a continuous guitar chord and vocal which relates to longing for somebody, getting them and then the anxiety of losing them,  a love song of sorts. Again, the number was quite hypnotic and you could hear the guitar frets as the instrument was played which I found was almost a distraction. I think it could have been toned down in the mix.

`With Or Without` has a drum machine beat and dreamy synth that ebbs and flows as the singer shares this tale of addiction and destructive habits. There`s an almost ghost like quality to `Hyasynth` which is about moving on in life and accepting past mistakes that have been made. It`s a slightly faster and much more upbeat submission.

This extended play closes out with `I Feel like I`m Blue` which relays the dreams and ambitions that this artist has for the future. It`s a quite trippy number where the vocals feel quite distant, quite unusual but nevertheless captivating.

`You Of Now Pt. 1` was an engaging introduction for me to Léa Sen whom I have to say possesses a delightfully rich and varied vocal range. As this was Pt.1, I imagine Pt. 2 will follow at some stage and I will certainly look forward to listening to it.