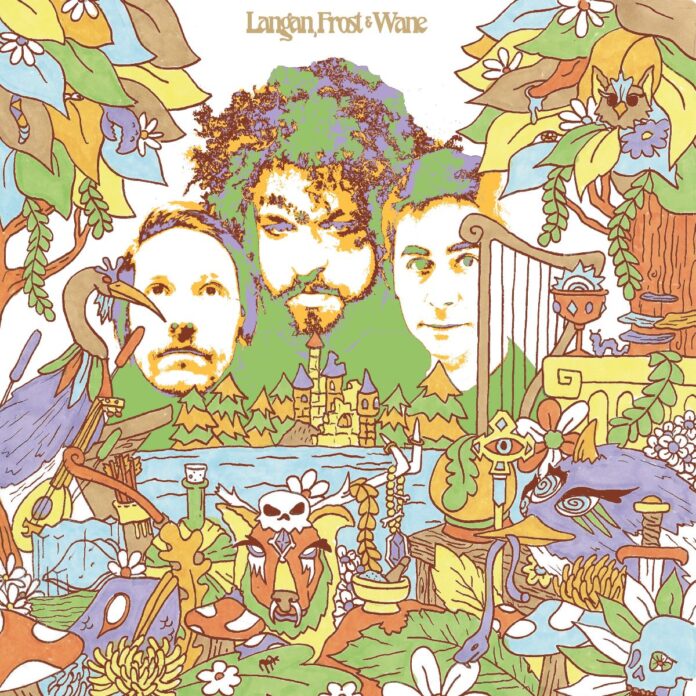 Langan, Frost & Wane is the collaboration of three songwriters, writing in the folk tradition and drawing candidly from the folk revival of the mid-twentieth century. Brian Langan has an indie / pop background having been part of The Swims and Needlepoints. RJ Gilligan (Frost) is steeped in much heavier doom laden bands with Meddlesome Bells and Dark Web and Nam Wane comes from a more acid folk environment. The guys have come together, and the result of their collaboration is a self-titled album that is steeped in Middle and Far East, India, the Mediterranean, and Appalachia soundscapes.

The album opens with `Perhaps The Sorcerer` with bouzouki and mandolin leading us along with what sounds like finger cymbals accompanying. There are some joyous harmonies and intricately played chords as we take this quite psychedelic trip. We move on with `The Dandelion` and the Dandelion generally symbolises happiness, joy, and youthful thoughts, but can also characterise health, power, perseverance, endurance, and determination. It’s also said to represent the sun’s power, good wishes, hope and prosperity. This number seems to encompass all that and more. There were some delightful vocal harmonies and a Jew’s harp twanging along as the song progressed.

`Falcon Ridge` seems to be a more straight forward folk outing which you could almost imagine being shared around a campfire whereas `Babe And the Devil` has a sort of early trippy Dylan vibe to it with some mesmerising percussion driving it along.

I have to say I loved `King Laughter` with it’s blend of folk fused with a Middle Eastern flavour with djembe drum and sitar. The vocal delivery almost became mantra like as the composition evolved. I felt there was a touch of Leonard Cohen on `Everyday Phoenix` which has some quite intricate guitar chords throughout and sweet harmonised vocals.

A drumbeat leads us into `Frozen Shell` which had a sort of medieval sense about it with a harpsicord, flute, a deep entrancing drumbeat and quite captivating vocals on this sort of winter tale. There are some quite sophisticated acoustic finger-plucked guitar melodies on `Learn The Name Of The Planets` which has violin and strings joining towards the latter part which gives it a deep sense of melancholy.

`Libra Moon` is a wonderfully dreamy offering and unsurprising as Libra is symbolized by the scales, a visual representation of balance, harmony, and union. Those born under this lunation are natural mediators, and Libra moons are happiest when keeping the peace. We have a similar sound with `Alchemist Of Hazy Row` which does have the addition of a flute like echo and violin tinges.

`The Weaver And the Traveler` seems to be a more traditional folk like ode but to me had a little edgy feel about it. We have all sorts of instruments on `Orange Magic` with harps, tambourines, flutes, and acoustic guitars all vying for recognition along this quite mystical almost spiritual journey.

`Everywing` is a quite dreamlike submission with handclaps and complex guitar tones. A number that sort of sways as it develops and has a nigh on hypnotic almost psychedelic sense of wellbeing. It could virtually be a pagan or nature worshiping anthem. I wasn`t sure what to make of `She Walks Alone` possibly a tale of yearning for a person who will never agree to become anything more than an object of desire.

The album closes out with `Diomyria` a wistful, forlorn, and fairly melancholic composition to end on.

The Langan, Frost & Wane album is a delightfully engrossing and absorbing listen and some of the musical segments and vocal harmonies are quite spellbinding. The guys seem to have a fascination for a period of time when English psych-folk seemed to be blossoming with artists such as The Incredible String Band, Donovan, and Bert Jansch so it will be interesting to see what follows.

In the meantime, sit back and wallow in the glow of this captivating offering.