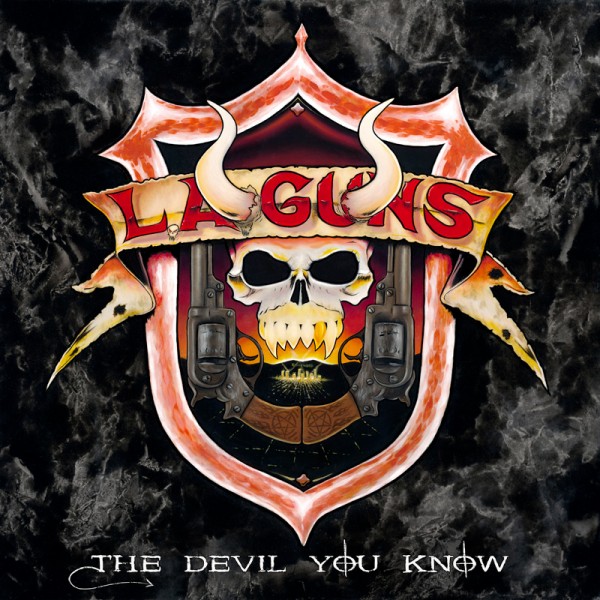 Getting the band back together – literally in this case – can be a problem.

I mean, there’s not just the fans expectations, there’s whatever rancour that caused them to break up in the first place to deal with.

That was especially true to in the case of LA Guns and the re-union of Phil Lewis and Tracii Guns that came about a couple of years ago.

You want to talk labyrinthian? The bands Wikipedia still lists two versions of the group. The Tracii and Phil mob says on its website that they are the “official” one (and given that it’s got Lewis and Guns in, it is spot on too) but that’s not all.

See, the problem with this reunion lark is that most bands only do it so they can play live, not these boys – but then they never truly fitted the mould anyway – they stuck out a brand new record called “The Missing Peace” . On this website rather excitedly said that the collection: “is most certainly their best in almost 30 years.”

Now, barely 15 months later, they’re back, back, back and those words need adding to: “Missing Peace”, we have to say, is their best in almost thirty years – until “The Devil You Know” came out.

Or as Lewis sneers, on the quite marvellous “Needle To The Bone”: “You think its easy? Well, it is to me…..”But it’s the music here that is arguably the most interesting thing about this. Because where most bands of this vintage would be quite happy to rehash the old stuff, the Gunners are shooting all kinds of different things out here. “…..Bone” honestly, wouldn’t be amiss on a Hellacopters record, and that seems to indicate a real freshness here.

When they announced another new record so soon after the first, my reaction was: “oooh, must be leftovers from the “….Peace” sessions. The first minute of “Rage” rather dispels that. Punky and absolutely ready to bring a knife to a gunfight, “you got the fucking brains of a dead man” spits Lewis, and he just might be raising a middle finger to all the doubters.

“Stay Away” could only come from the minds of this band. It bottles the sound, it really does, and they are still cocked and loaded. “Loaded Bomb”, likewise, shows that other bands might do sleaze, but no one does it quite like this – or this well. “You can’t play the victim,” offers Lewis here, “when you’re always playing sides” and he does so over some genuinely filthy sounding piano, as they look to expand things on this record.

The title cut is slower, more deliberate, but has a crunch in its crosshairs, while “Going High” which anchors itself on a mighty groove likes the idea so much it rather repeats the dose in truth and “Gone Honey” hides a real menace in its radio friendly flavour – and the fact it rhymes with “been gone” with “cling on” is much fun.

On a record with no weak points at all, there is something gleeful about “Don’t Need To Win” that suggests that they’ve got a hand with four aces. “Down That Hole” on the other hand, has a touch of slide guitar about it, and the main riff would suit Lenny Kravitz at his heaviest.

It is a quirk of this record that nothing is too short here. Most are over four minutes, as if there was no shortage of ideas, “Another Season In Hell” clocks in at six and a half. It’s not a ballad, but it is the closest this gets to it. If there’s no ballad of Jayne or anyone else here, then that’s just fine. This is too hard edged for that and the 21st century rocker doesn’t need sentimental anyway – they do, however need this. Fast.

Disclaimer time:  LA Guns are not just AN Other band to me. They were the second I ever saw live, sandwiched in-between Love/Hate and Skid Row on November 20th 1991, when I went to my first ever concert as a 16 year old, but the thing is, there ain’t nothing approaching rose tinted specs here. This is a magnificent slice of hard rock.