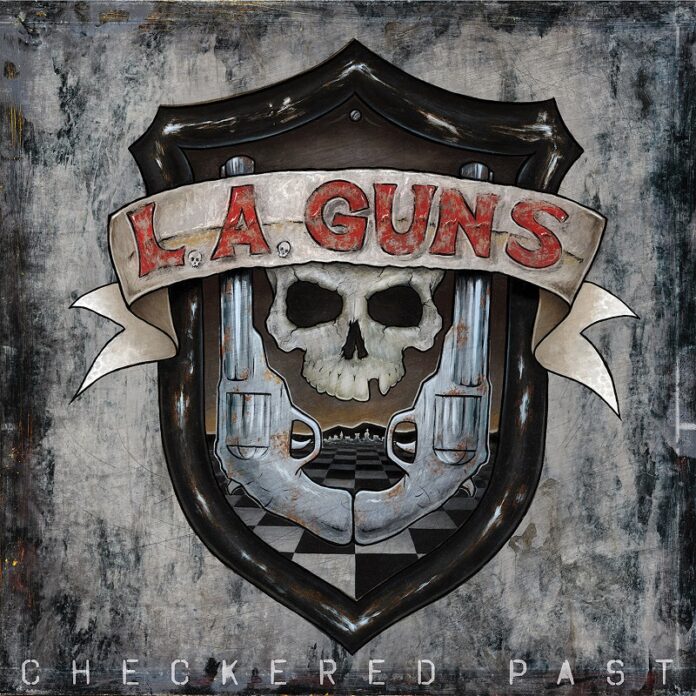 The history of LA Guns is complicated. Even as a fan of 30 odd years standing you can get lost in it all. I’ve seen two versions of the band play live, in the last year or so I’ve reviewed two bands with the name.

So lets keep it simple shall we: “Checkered Past” is the real LA Guns. Why? Well, this is the one with Tracii Guns and Phil Lewis in.

That clarity aside, they’ve been prolific since Lewis returned to the fold. Since 2017, this is their third studio record, there’s been a live record, and damn it all there was even a Christmas EP that didn’t make me want to gouge my eyes out with a spoon.

It’s the contrast between the live album (which came out in the summer) and this that most strikes you though. While that collection was their “Cocked And Loaded” record in full, and was fun and everything, this one is the sound of a band moving forward and actually still with plenty to offer.

“Cannonball” kicks off in trademark punk tinged fashion and is sleazier than almost anything this side of a Tory MP with their second job. It also has a solo that suggests that Guns reckons those arena rock days aren’t behind him, but look closer. This is no plea for “Sex Action” or anything of the kind. This is angry, dark, bleak even. The party is over. Deal with the fall out.

That’s been LA Guns since Lewis came back, and he’s ramped up his sneer here. The blues flavour of “Bad Luck Charm” still casts him as sniffing glue out the back with Ramones, while the way he spits out the lyrics to the brilliant “Living Right Now” including the stunning couplet: “Suzy got a uzi/ And Davy better run”, which leaves you rather concerned for Davy’s safety, suggests everyone enjoyed this one.

The sequence of the songs too, suggests that the band have a message here. The first three are loud and brash, then “Get Along” –  with its kind of Beatles thing – and “If It’s Over Now” – a sort of power ballad for the 21st century, remind everyone that they always knew how to do the slow ones.

Section three of the record kicks off with one of the best. “Better Than You” is the most “early” LA Guns that this one has to offer. The deadpan delivery of the chorus alone marks this one out for special treatment.

“Knock Me Down” builds slowly and would – if anyone bought singles anymore – be the hit on this one, before “Dog” boogies like its playing with the big boys, but when they are going home the L Guns are still standing, brother.

Chapter four (if you will) is different again. “Let You Down” is one of the outliers of their whole career. More, I suppose, aligned with their “Hollywood Vampires” days than any other, its huge, dark and excellent.

The groove that the band get these days is impressive. Ace Von Johnson is a fine foil for Guns and Scott Coogan and Johnny Martin provide a fine rhythm section. “That Ain’t Why” rather underlines all that and if “Physical Itch” rather brings us back full circle, it does so on its own terms. The LA bands didn’t sound like this in 1990, but it feels like a natural evolution, to something heavier and nastier.

And yet, it’s a move that only the LA Guns, really, have made. All the other bands of the era are either not around, or the ones that are, merely knocking the old ones out. Not here. And if I may be so bold, the key to it is in the chorus of “Better Than You.”

Lewis sings this: It’s a game/And I know just how to play it/Yeah, I know just what I do/It’s a shame/That you’re always losing, ain’t it?/I play the game better than you”.