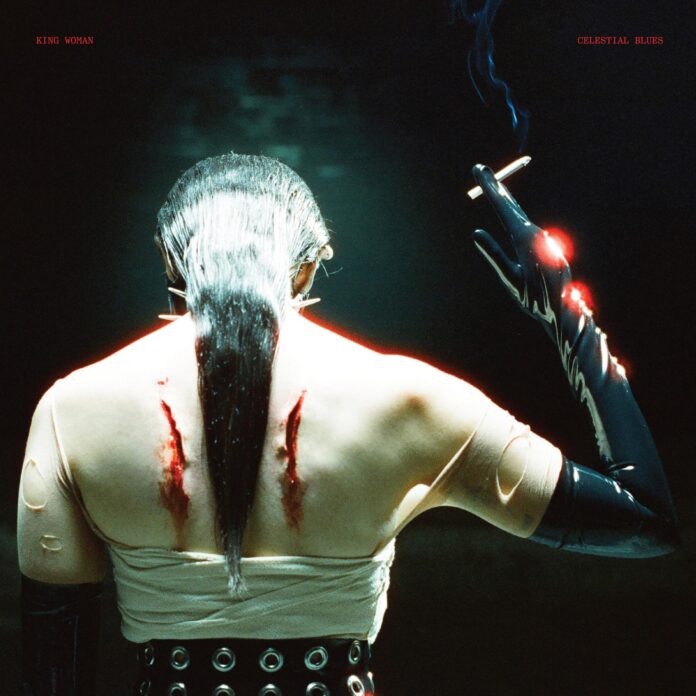 King Woman are a band formed by vocalist Kristina Esfandiari originally as a solo project in 2009. The project later became a band, after she was joined by her childhood friend, Joey Raygoza on drums. These days they also have Peter Arensdorf on guitar and have just released their new album “Celestial Blues” the follow up to “Created In the Image Of Suffering” released four years ago. Kristina also releases music under a multitude of personas: Miserable, KRIS, Dalmatian, Sugar High, and NGHTCRWLR. `Celestial Blues` was born out of the singer Kristina Esfandiari using the Biblical allegory of Lucifer as a framing device for songs about her own harrowing personal metamorphosis. She felt compelled to reshape the biblical archetypes that once bound her, and has created a theatrical tale of rebellion, tragedy, and triumph, a metaphor for her own personal experiences over the years.

The album opens with title track `Celestial Blues` which builds quietly with just breathy vocals and some ethereal guitar chords before it bursts into life with a doom like musical texture. Although it seem to revert back to a much quieter phase before again regaining a heavier tone. There sems to be an awaking and a conflict of spirituality and not belonging in the subject of the narrative which bleeds into the musical soundscape. We have a sort of interpretation of Lucifer’s fall from grace with `Morning Star` which again begins quietly, erupts with thumping drums and blistering guitar before closing out with a more hypnotic phase where although there`s a heavy musical base, the vocals become almost unnervingly chant like.

`Boghz` is another delightfully unsettling composition which initially has softly shared vocals, a dreamy guitar riff and tribal like drums before rupturing into a brutal bruising atmospheric before easing us back to a sort of calm before another storm of structured tumult. The singer has related that “It’s a tragic story about one ancient soul split in two separate bodies. Only knowing a sick and twisted version of love, one half nearly destroys the other.” “It’s about being at the mercy of a sadistic person who you have an undeniable psychic bond with.” I felt there was a real fragility in the vocals on `Golgotha` which has a pounding drumbeat before screaming guitar riffs join midway through. It returns to a trance like phase at the latter part and continues like this until the end. Calvary, or Golgotha was according to the Gospels, a site immediately outside Jerusalem’s walls where Jesus was crucified.

`Coil` has tribal drumming once again and some blazing guitar riffs with vocals that are screamed atop this ferocious cacophony with lyrics that are an uncomfortable read. There`s a more illusory or surreal texture about `Entwined`. A powerful track with lyrics that seem to reflect and question the life the orator has led and appears to be searching for something or somebody to give them purpose.

`Psychic Wound` follows and it`s a quite disturbing listen with the last minute taken over with the singer screaming. A psychic wound is an emotional, psychological, or spiritual wound caused by emotional, psychological, or spiritual assault severe enough to damage the Bodily Ego. I read somewhere that it was written about paying the price for eating forbidden fruit. The truth i`m sure lies somewhere in between. I had that feeling of the quiet before the storm listening to `Ruse` which seems to be about a relationship that swings from almost being subservient to domineering partner.

The album closes with `Paradise Lost` which has references to the story of the fall of man or the temptation of Adam and Eve and their expulsion from The Garden of Eden. It has a sort of gentle sadness about it with initially guitar and vocal before drums enter and lead us on. I felt I could practically feel the pain and confusion in the vocal delivery. A quite powerful submission to end on.

`Celestial Blues` is an absorbing and entrancing listen. At times it`s almost a cacophony of controlled noise with crashing guitars and thumping drums then at other moments it has a vulnerability and fragility about it. It`s mysterious, evocative, atmospheric and has a certain tension and edge to it. There are biblical references and metaphors to possibly personal experiences that the singer has endured and experienced over the years but retains that captivation in what`s being shared. It`s the sort of release that you`ll need to revisit time and time again to possibly comprehend some of the mystique involved.