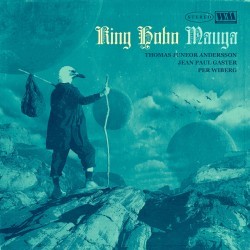 It’s supergroup time – this one comprises Jean-Paul Gaster (Clutch) on drums, Per Wiberg (Kamchatka/Spiritual Beggars/Candlemass/ex-Opeth) on vocals, bass, and keys, and Thomas Andersson (Kamchatka) on vocals, guitars & percussion. It’s the first of these that sparked my initial interest – I’m a big Clutch fan and even as a non-musician, I recognise how great a drummer JP is and how Clutch ‘swing’ so much as a result.

Recorded in Sweden and released a full eleven years after their debut album, this album kicks off with ‘Hobo Ride’, which is a pretty straightforward rock song, albeit with stoner rock influences. ‘Dragon’s Tail’ follows and its crunchy riff is soon joined by some funky drumming and a chugging organ. It’s a great song with a guitar solo to match and it’s easy to see why this is one of the lead songs from the album.

‘King Blues’ is just that –a slower based song with it’s feet planted firmly in the blues and including tasteful sax blowing throughout. In fact it’s a song so blue that it wouldn’t be out of place on a Joe Bonamassa album.

‘Good Stuff’ keeps the rock quota up with its stinging guitar solo before the album’s instrumental title song quietly announces itself. The sound of the sea leads into some blues guitar over a brushed snare; it’s a low key number that is deceptively good.

‘How Come We’re Blind’ has more of the simple blues guitar over the brushed snare. Atmospherically the song reminded me of Porcupine Tree with shades of The Beatles –this may sound weird but it works.

‘Listen Here’ sounds like the Spiritual beggars, which is no surprise as this is one of Per Wilberg’s day jobs. A full-steam ahead rock song that builds to quite a crescendo by the end of its brief 2 ½ minutes.

‘Move To The City’ is the closest the album has to a Clutch number and for me it’s this song and ‘Dragon’s Tail’ that are the two commercial stand-outs on the album.

‘Twilight Harvest’ is the last track proper of the album – it starts with a musical break that could be from the Blaxploitation moves of the early 70’s but adds a Deep Purple style chorus to create another album highlight. In fact, despite my thoughts that it’s not the most commercial song on the album, it’s the best thing here and as it stretches itself over the best part of eight minutes, it becomes a real ensemble piece.

The digital album comes with a bonus track, ‘New Or-sa-leans’ and like most bonus tracks, great if you get it but not a deal-breaker if you don’t. Its title tells you that this instrumental is a Louisiana influenced song that has the shuffle of Little Feat and accordion of The Subdudes. It’s not a bad song, just a little incongruous with the others here.

This is a good album that will appeal to fans of the member’s parent groups but is also good enough to establish its own following and it contains a few gems, which can’t be said about many albums that come up for review.