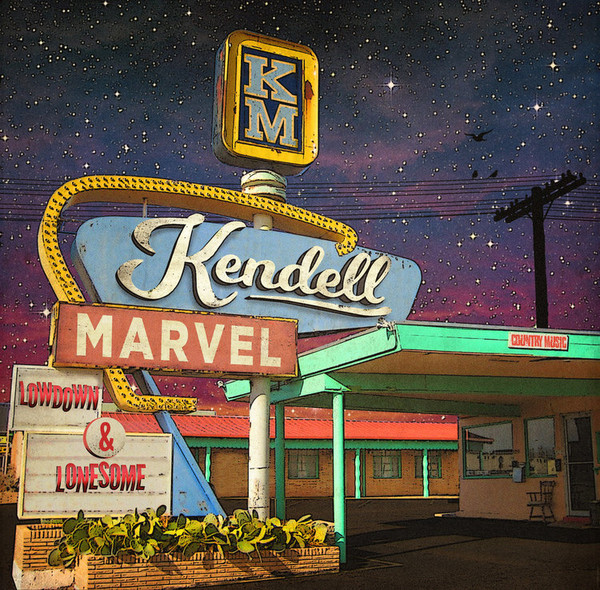 When I was a teenager, I had a serious thing for early rock n roll, Elvis, Jerry Lee, and all that. As part of it, I set about collecting as many Elvis records as I could find. One was called “Elvis Country” and it began my love for country.

As I began buying more of the music, from Johnny Cash to Garth Brooks I got loads of the stuff, I was always struck just how many times blokes were in bars trying to get drunk to forget heartbreak. If Springsteen would never have made a record if he had failed his driving test, then these boys would have had no chance in the prohibition era.

Kendell Marvel is hewn from the same granite as all the greats, and his debut album inhabits the same bars at way past closing time. At this point it is perhaps worth saying that this is a debut album with a heavy “but”. Because for more than twenty years Marvel has been writing tunes for anyone who is anyone, massive great hits too.

Most recently seen on the new Brothers Osborne record, it was perhaps natural that he dipped his toe in these waters, and “Lowdown And Lonesome” is stunning.

Understanding that nothing like this needs to outstay its welcome, instead, the maxim here is “don’t bore us get to the chorus” and as such everything here is a solid gold hit – and pretty much everything sounds absolutely filthy. If these were written in bars then, brother, they weren’t salubrious. They were back alley joints and that’s where this belongs.

“Bartender keeps a picture on the wall here just in case, I ever can’t remember how I wound up in this place” he says – literally given that he doesn’t sing the line – on the title track, and essentially that thought underpins the whole record.

“Lowdown And Lonesome” (the song) immediately inhabits some land in between Skynyrd and Jason Isbell and “Lowdown And Lonesome” (the album) is as varied as you like.  There are some outright country classics, though, thank goodness. “Gypsy Woman” proves that nothing conveys sadness better than Lap Steel and the fact that Marvel has a voice that echoes Waylon Jennings doesn’t half help things.

Elsewhere, stomping rock n roll is the order of the day. “Heartbreak Off My Back” – “where the whiskey’s up and the girls are down” he offers – is down for a Georgia Satellites style romp, the harmonica here from Mickey Raphael is worth buying the record for on its own, but as if to emphasise the fact it will do things in the way it wants, “Watch Your Heart” has a real Allman Brothers thing going on.

His standing in Nashville being what it is, Marvel is able to call on some of the best session players around, meaning the album sounds incredible, even before you factor in the skill in the honky-tonk rabble rousers like Untangle My Mind.”

There is something of the Sun Studios about “Tryin’ Not To Love You” and its old-time sounds, while the blue-collar heartbreak in “Hurtin’ Gets Hard”, will be universal. And this one has got gold record written all over it.

“Closer To Hell” is fun, and deals with the onset of a trip down below with a cheery air: “preacher said the truth is gonna set you free/ so I started confessin’, he started sweatin’ and had to get up and leave” sings Kendell with tongue in cheek (you imagine…).

And if you still need a handle on why this record is a copper-bottomed classic, then there’s the last two songs. “That Seats Saved” is the sound of country bottled, but then, all out reflection ain’t gonna help anyone, is it? Not when there’s beer. And not when the spirit of ZZ Top can be found, and not when there’s plenty more fish in the sea. Which is precisely why “Drinkin’ My Baby Goodbye” exists – and remember it’s her loss anyway…..

You can cut this any way you like and keep coming back to the same conclusion. “Lowdown And Lonesome” is quite something. Fun, well put together, classic in delivery but modern in thought, it might just be the country record of the year so far.