REVIEW: KAREN JONAS – THE SOUTHWEST SKY AND OTHER DREAMS (2020) 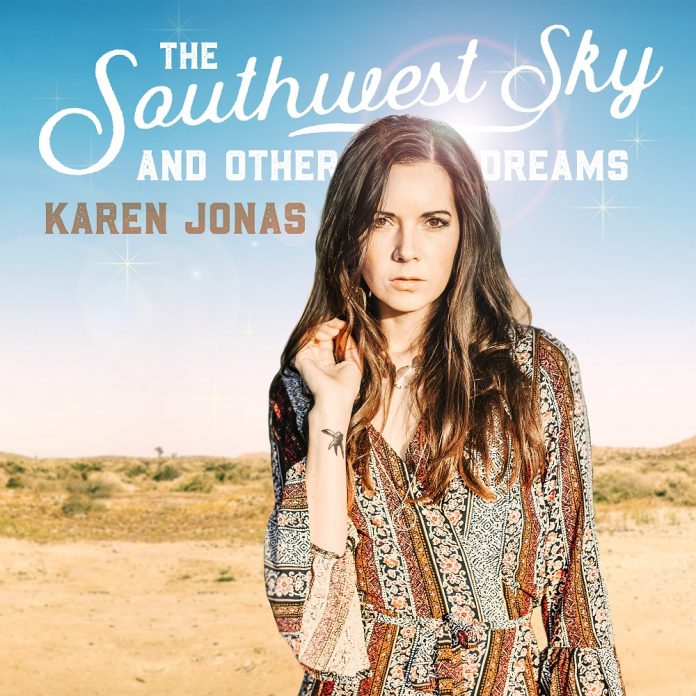 Karen Jonas is a Country and Americana singer songwriter from Fredericksbuerg, Virginia and has been pretty productive since arriving on the scene in 2014. Her fifth album “The Southwest Sky and Other Dreams” takes the vast desert expanses of the American Southwest as her backdrop, as she embroiders small-town snapshots into vivid explorations of our inner struggle between ambition and inaction.

The opening track `The Last Cowboy (At The Bowling Alley)` is a quietly shared tale of a cowboy who`s still hanging around the bowling alley, a faded local hero still here years after all his friends moved on. This poignant tale is related over a musical backdrop that has a slight Mexican feel about it with some sweet pedal steel and guitar licks throughout. There`s a nostalgic look back on a trip the singer took with a former boyfriend to the Mojave Desert which was initially fascinating but led ultimately to disillusion. There`s a slightly melancholic feel to this tale of wondering whether her partner misses her or if he takes other potential conquests there.

`Tuesday` is a breezier offering relating to someone whose life seems to be passing them by and has gotten into a bit of a rut where it`s easier to put things off rather than face up to them. A further carefree parable comes with `Pink Leather Boots` which has a real rockabilly feel detailing a trucker daydreaming at a strip club, planning an imaginary life for him and this girl, then he gets in his truck and drives away.

I really loved `Maybe You’d Hear Me Then` a thoughtful, plaintive and reflective piece of looking at a life that could have been with a wonderful line “You’re working some nine-to-five, making plans for some better life, The Southwestern sky and other dreams you’ll never find.” The pedal steel almost echoing the heart break in the song. An old fifties rock n roll styled number follows with `Be Sweet to Me` a bit of a curve ball and a song that I can`t say I took to.

We have a quite haunting texture to `Farmer John` a narrative of a broken marriage interspersed by a wife’s empty threats. Another standout track for me was `Barely Breathing` a quite stripped back number which highlighted what a remarkable voice Karen has. I felt it was indeed physically and emotionally breathless at times.

`Better Days` is another where the musicians create a platform for the singer, allowing her expressive vocal to paint a vivid and animated picture of acquaintances whose lives just haven`t turned out as they expected. The album closes out with `Don’t Blink Honey` a final opportunity where Karen`s vocals shine on this tale of seemingly living for the moment.

“The Southwest Sky and Other Dreams” is an interesting assortment of stories and tales, real imagined or adorned, brought to life by some talented musicians with Tim Bray (electric guitar), J.Tom Hnatow (pedal steel, wurlitzer), Seth Morrissey (bass) and Seth Brown (drums) and a singer who has a rich and diverse range that can bring a smile to your face one minute and then have you close to tears in the next