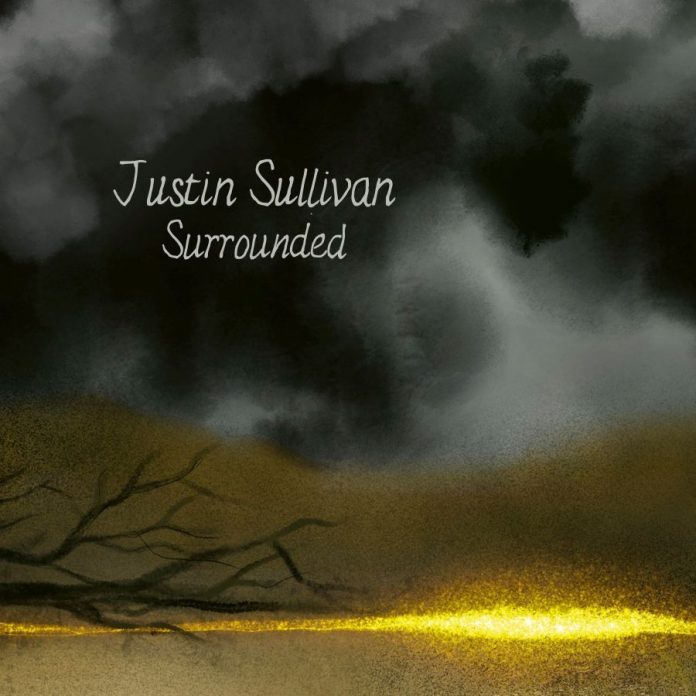 It’s a phrase I often use in reviews, because it seems to me to encapsulate a lot of things, and it does here. This record was one that whoever needed to make. That certainly seems to be the case with “Surrounded”, because it seems trite to say that as lockdown hit, Justin Sullivan wanted to make a second solo record. No, rather, having to create is something that comes from deep within.

The first one – if we look back – “Navigating The Stars”, was written in the kind of aftermath of 9/11, but was informed by it rather than “about” it (Springsteen did something similar with The Rising), but lets be honest, if you are going to write a “singer/songwriter” record in 2021, then if it isn’t infused by the pandemic then you’re doing it wrong.

And Justin Sullivan has been getting most things right for almost 45 years, so you best believe this is no different.

“Dirge” starts things as it means to go on. It’s strange, eerie and a little claustrophobic. That seems to be the vibe he was going for throughout. There are times in the track where I was convinced he was humming “You’ll Never Walk Alone”, but its first line: “On into the wilderness the prophet leads the blessed” is telling, given that the moors, the windswept, wide open spaces, the solitude seem to be the hinterland of the album.

Although there is the odd NMA bandmate and Florence And The Machine’s harpist Tom Moth making an appearance, it feels a very solo record, as it were. On “Amundsen” – about the Norwegian explorer who went missing and was never found – he sings “Never trust in people/Make good preparations/It’s only the dogs that are faithful” and whilst he’s telling the story, then maybe some autobiography has appeared?

“Coming With Me” is brilliant. Evoking the small hours, when you are with your thoughts and memories. “They’re coming with me. All of them.” He proffers and in so doing, he has nailed the mental state that many had in lockdown, and even when there’s a more airy, lighter feel, as on “Clean Horizon” he dredges up the “faces of the past”. It feels very much the type of record where it was Sullivan and his stories and they’ve all come out.

I’ve always thought that NMA were one of the best at weaving their environment into the lyrics and there’s that suggestion frequently on “Surrounded”, as on “Stone And Heather”, (Levellers fans need to listen to this one) when he sings “If I could see in your soul there would be stone and heather. And the miles of fells stretching away forever.”

It’s the narrative details, that make these all seem like short stories. “And the whiskey is neat and thick on the tongue – like blood” is a perfect example of that – and is a wonderful line on “28th May”. “Akistan” deals with slavery from a human perspective, and the guitar work and harmony on this one make it very special.

“Unforgiven has a much more strident feel, while the half-spoken “Sau Paulo” changes the feel totally, but underlines the fact that the real world and the spirit world isn’t that far removed. “1975” may or may not be autobiographical – but its first line references “turning 19”, which Sullivan would have been then – and enigmatically refers to “no reflection in the mirror.” Maybe he wants to disappear in that moment, but he follows it up with something that sounds vaguely hopeful in “Sea Again”, while “Clear Skies” finds a human story in the face of impending disaster, and does it brilliantly, before “Rip Tides” extends the sea metaphor further, but it pretty much insists you get in for a swim.

It is staggering, actually, how disparate in tone, feel and story these are. “Daughter Of The Sun” is pleasingly dreamlike, while “Ride” has a kind of Iggy Pop energy, and there’s a fragile kind of melody to the title track too.

Not an immediate record in any way, shape or form. Not the type of album either with anything bombastic, or anthemic about it at all. It was, though, not supposed to be. A lengthy opus – 16 songs and over an hour – it is one that almost demands you listen to it all the way through and with your full attention (as perhaps the last Dylan one did). Do that and “Surrounded” is a genuine and true gift.