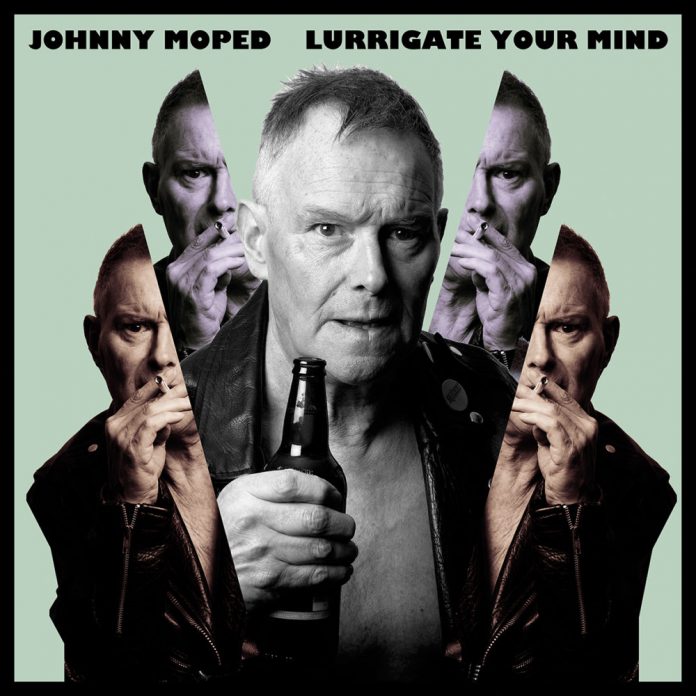 It’s not like anyone reads this stuff except my mates anyway (maybe….) so I might as well admit to being thick, innit.

When this turned up I looked up the word “lurrigate” only to find that it had one refence online. On reviews of this record. So Johnny Moped 1-0 Andy before the game has even kicked off.

Thankfully I was aware of Johnny and indeed his vehicle before this. Not least because you have to love a band that has a 38-year gap in between the first and second record.

And, more to the point, you have to love a band that stays as true to itself as this – especially when the songs are as good as this.

A mere two years after their second record, Johnny Moped are steaming back with album number three, and frankly, “Lurrigate Your Mind” sounds like it wishes it was still 1978. It concerns itself with the modern world a few times, notably on the wonderful “Communication” and decides that the modern world, well, its shit thanks. “You’ve got my digital number” sings Paul Halford (Johnny to his mates) with all the understanding of the time me, my brother and sister in law attempted to explain WhatsApp to my dad, before he concludes “you know its not going to last…..”

Here, though, is what did endure: punk bloody rock. And if you don’t mind, “…..Mind” has 13 slices of it (there’s a very odd psychedelic interlude in which he reads a shopping list to complete the set). These are slices that basically sound like they were conceived (and the idea of being that when Johnny was conceiving anything is both scary and delightful at the same time) in a rancid basement, recorded for posterity with a load of blokes watching in the corner.

“Okie dokies, lets do this!” he exclaims before the opening “Catatonic” and they do. Oh good lord they do. It’s got all the poise and skill of a 14-year-old looking at Razzle Readers Wives and seeing his next door neighbour, but just like that analogy, you try and resist it.

“Hey Belinda” ditches the poor girl. Many of these songs exist, and they are ballads. Here, Belinda is dismissed as a “wretched old cow” and the vitriol is such that you don’t want to pry too much. “No Way Out” offers just about everyone out for a scrap – and Johnny, you can bet, can fight dirty – “Living In A Dream World” has the flavour of Billy Bragg’s punk band Riff Raff, and its not meant as an insult that Billy can sing better too.

“Brian’s Staying In Bed” is the tale of a lad who wastes his talent by taking LSD, but to be honest, it sounds like its envious of Brian. “Doom Spires” is less knockabout, and instead is a pretty vicious put down of religion, “Feel Like I’m Falling Away” tackles depression head on, but with a bigger, more nuanced groove than some of its brethren, and the saxophone adds a different dynamic.

Apart from “Communication”, arguably the best thing here is the glorious “Where’s Shergar? (spoiler alert: according to the backing vocals, “he’s dead”) and never has the line “all eating health food” been spat out with such bile. “Devoid Of Emotion” actually allows itself a proper intro and is a study in nihilism, “You Kill Me” sounds like Graham Parker pogoing a punk tune, and the fact that “Oh Baby” is a answerphone message rather indicates that this is a man who ain’t texting: the chat-up line of “I want to swim naked with you in a pool” is one that I might use, though, so thanks mate.

“Black Witch Climax Blues Band Genetic Breakdown” begins in Selhurst Park (I’ve watched football there, its horrible) but more pertinently the protagonist “got the sack and then he formed The Damned”. Mr. Sensible was – along with Chrissie Hynde – a member of Johnny Moped back in the day.

“Back in the day” doesn’t actually apply here. It’s still the day. This is the sound of music that is basically swigging special brew on a park bench and it doesn’t give a toss.