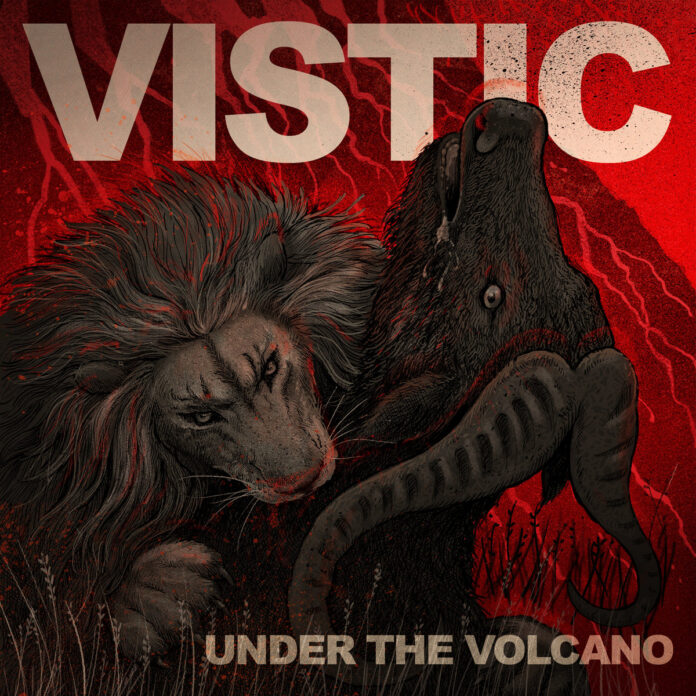 John E Vistic is a Bristol-based British-Australian, singer-songwriter, and the lead singer and guitarist for The John E Vistic Rock N Roll Soundsystem. He`s been called a cult legend by BBC Radio 6’s Tom Robinson and ‘a towering figure on the UK live scene’. His musical influences include The Jesus and Mary Chain, Marky Ramone, Jesus Lizard, PIL, Bauhaus, The Stooges, The Birthday Party, The Cramps, Sisters of Mercy, The Cosmic Psychos, Rocket from the Crypt and The Beasts of Bourbon as well as contemporary acts like Idles, Metz and Fontaines DC.

His latest album ‘Under The Volcano’ released this month is inspired by Malcolm Lowry’s island of Gin and Death, Bob Dylan’s Black Diamond Bay, Ezra Pound, TS Eliot, WB years, Shakespeare, and the general sin of Hubris. This album is Part One of a Three album Triptych, including ‘Sense of an Ending’ (Part II) and ‘Oblivion’ (Part III).

The album opens with the wonderfully titled `The Sublime Architecture Of Death` which races along at 100 mph in a sort of cacophony of noise with occasional delightful saxophone bleats and a mantra of “We’re all in this together” that will have you screaming it aloud by the time the track closes out. The heartbeat of `The King Of Rock N Roll` is it`s pounding drumbeat but we also have a steady bass line, saxophone snatches and a buzzing guitar which allows the singer to vent the lyrics with the vitriol of the late Mark E Smith of The Fall, cracking stuff.

Psycho Death Cult` opens with a quietly shared gothic vibe and as the vocals join I felt there was a slight Peter Murphy Bauhaus texture about them. The track becomes a superbly hypnotic earworm and with its repeated refrain of “I`m a hunter gatherer”, it`s probably a good job Herr Vistic isn`t a leader of a sect as he`d have a lot of us converted to the cause. We have a more mid paced offering with `It’s Nature` but it isn`t any less powerful for that. It seems to relate to following your own path rather than what society expects you to do. At times there`s a dreamlike quality about it which to me seems to be a more subtle way of spreading the message.

I read somewhere that `LOUTZ` evolved from the reworked lyrics from two of WB Yeats’s late apocalyptic poems. It a captivating, deep, dark and brooding submission with vocals that reminded me of a young cynical snarling Hugh Cornwall. In the latter part of the song, it almost halts while we enjoy a passage with just piano keys, a dreamy sax and John`s vocals before the mayhem returns.  We have the quite mesmerising `I Am The Shadow` up next with its sort of hints of The Jesus and Mary Chain, a number that had me hitting the repeat button and drew me like a moth to a flame.

There`s a sleazy sensitivity about `Long Black Cloud` with it blistering guitar riffs and quite angry come indignant vocal delivery. A diatribe on the decline of humanity possibly. There`s a quite tribal pulse like feel to `Heart In Danger` which is predominantly a drum based piece but has some shared lyrics midway during this brief number.

`The Moronic Inferno` has a fuzzy bass line that leads us through this edgy track where the singer shares an invective of how the world has seemingly turned to shit and nobody seems to give a damn or even realise. The despair is almost tangible in the vocal delivery. There`s a more mid-tempo garage rock out with `All Animals Again` which was quite stop start at times.

There was plenty of venom throughout `Rattlesnake (Die Die Die)` which to me had a hint of the sadly missed American psychobilly / horror punk outfit the Cramps. The album closes out on the stripped back `Sapiens` with just an acoustic guitar and vocals. Another introspective view on how life could be more utopic.

After listening to ‘Under The Volcano’ I can understand why there are a number of high profile names preaching the virtues of this artist. This singer songwriter seems to be on a mission to get his message across and what better a way than through some blistering rock n roll. He himself handles not only the vocals but guitars, piano, synth, trombone, violin and has utilised the talents of other gifted musicians with Rob Norbury (guitars, backing vocals), Graham Dalzell (bass, backing vocals), Bex Sneddon (sax, backing vocals) and Dan Clibery (drums, backing vocals) to bring his vision to life.